Items related to The Making of an African Communist: Edwin Thabo Mofutsanyana...

The Making of an African Communist: Edwin Thabo Mofutsanyana and the Communist Party of South Africa 1927-1929 (Hidden Histories Series) 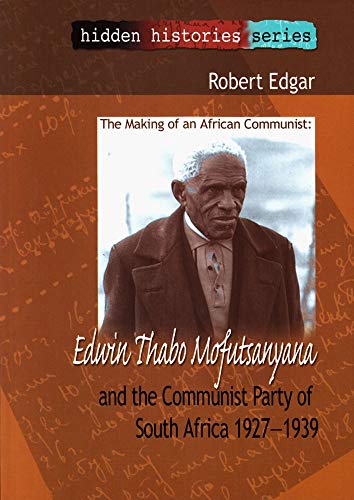 The book is a short biography covering part of Mofutsanyana's eventful life, a period of turbulence within the Communist Party of South Africa, of which Mofutsanyana was at one point General Secretary. Edgar bases his account on extensive archival work both in South Africa as well as in Russia, and has some notable interview material. Robert Edgar is Professor of African Studies at Howard University in Washington, D.C. He has written primarily on twentieth-century Southern African political and religious history. Among his works are African Apocalypse; the story of Nontetha Nkwenkwe, a Twentieth Century South African Prophet (with Hilary Sapire) and An African American in South Africa: the travel notes of Ralph J. Bunche, 1937.

1. Making of an African Communist : Edwin Thabo Mofutsanyana and the Communist Party of South Africa, 1927-1939