Items related to As If Running on Air: The Diaries and Journals of Jack...

Lovelock, Jack; Edited By David Colquhoun As If Running on Air: The Diaries and Journals of Jack Lovelock

As If Running on Air: The Diaries and Journals of Jack Lovelock 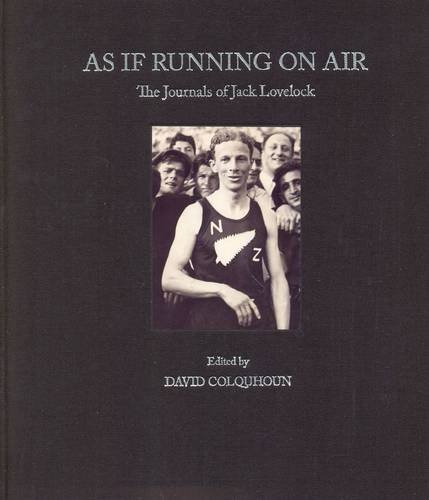 282 pages. Black cloth boards with pictorial paper illustration on front board. Page dimensions: 240 x 213mm. "In the 1930s the New Zealander Jack Lovelock was one of the world's best-known athletes. In 1933 he broke the world record for the mile. At the 1936 Berlin Olympic Games he won a gold medal and broke the world record for the 1500 metres. When he retired, a leading sports writer lamented the end of a golden age of mile racing. Throughout his running career Lovelock kept journals and diaries. Other athletes have collected photographs, clippings and memorabilia, and many have kept training diaries, but few, if any, have had the inclination to write about their sport quite as he did. While much has been written about Lovelock, until now his journals and diaries have never been published. As If Running on Air reproduces his journals from late 1931 to the end of 1935 and extracts from his 1936 training diary. An entry appears for every race. Some are brief, little more than notes; others are eloquent and reflective. Collectively they constitute a unique record of a sporting life in the 1930s and offer insights into just what it took to make a world champion. An introduction provides an overview of his life, a description of his albums, journals and diaries, and a discussion of the various myths and legends about him. The journal entries for each year are prefaced by a short explanatory essay providing some more detailed sporting background. Interspersed are short biographical sketches of those who helped make this such a great era of middle-distance racing. At the end is an essay about his training methods, and a full race list. The book is illustrated almost entirely with photographs and cartoons from Lovelock's own albums."

About the Author:
David Colquhoun is Curator of Manuscripts at the Alexander Turnbull Library in Wellington, where the Lovelock manuscripts are held. In 2000 he curated the exhibition Come on, Jack! The Lovelock Olympic Story, at the National Library Gallery.

As If Running On Air: The Journals of Jack Lovelock