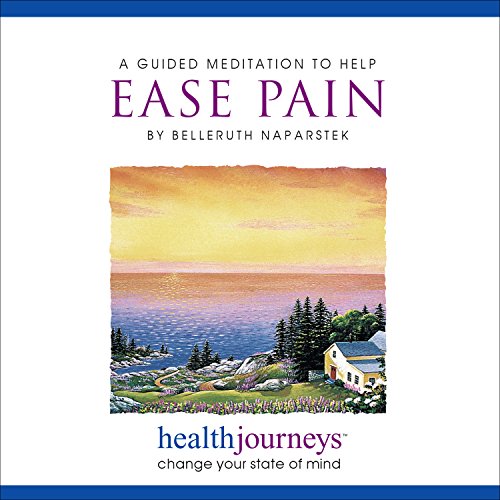 Guided meditation for chronic or acute pain uses two research-proven methods for pain management: it provides pleasant diversion for the mind with positive, healing guided imagery (good for chronic pain); and it offers guidance for facing and softening acute pain, such as muscle spasm, injury or post-surgical pain. A separate track of affirmations provides quick relief in a briefer format that can be enjoyed while engaged in other activities. Guided imagery is a complementary, mind-body therapy that consists of healing words and images, set to soothing music, to achieve specific healing or wellness goals. Repeated listening once or twice a day for 2-3 weeks ensures maximum impact. Through relaxing around and through physical or emotional pain, refocusing the mind, and marshalling serotonin-elevating images of love, gratitude, safety and peace, muscle aches, joint pain can subside, minimized or even transformed. Written and narrated for Health Journeys™ by guided imagery and holistic health expert Belleruth Naparstek and scored to the exquisitely soothing music of Steven Mark Kohn. This empowering program has been found effective for many kinds of chronic pain management, for conditions as diverse as pancreatitis, fibromyalgia, muscle spasm, emotional pain, joint pain relief, headache, gastric distress and back pain. (Running Time: 44 min.)

Belleruth Naparstek, LISW, BCD Psychotherapist, author and guided imagery pioneer Belleruth Naparstek is the creator of the popular Health Journeys guided imagery audio series. Her first book, Staying Well with Guided Imagery (Warner) is a widely used primer on imagery and healing. Her second book, Your Sixth Sense (Harper Collins) has been translated into 9 languages and called one of the most thoughtful and sophisticated looks at imagery and intuition. Her latest book on imagery and posttraumatic stress, Invisible Heroes: Survivors of Trauma and How They Heal (Bantam Dell), won the Spirituality & Health Top 50 Books Award. Highlighted in the 20th anniversary edition of their seminal book, Courage to Heal, Ellen Bass and Laura Davis call Invisible Heroes, the most useful book for trauma survivors to be published in the last decade . As Prevention Magazine noted, she has been quietly creating an underground revolution among mainstream health and mental health bureaucracies, by persuading major institutions such as the U.S. Veteran s Administration, the U.S. Dept of Defense, Kaiser Permanente, Blue Shield of California, United Health Care, Oxford Health Plan, scores of pharmas and nearly 2000 hospitals and recovery centers to distribute her guided imagery recordings, in many instances free of charge to recipients. Recently she has been developing military-friendly resources with the help of the U.S. Army and the Ft. Sill Resiliency Center, and DCoE (Defense Centers of Excellence) has declared guided imagery one of their Twelve Promising Practices. Her audio programs have been involved in over two dozen clinical trials, with nearly a dozen studies completed to date. Efficacy has been established for several psychological and medical challenges, most recently for military sexual trauma and combat stress at Duke University Medical Center/Durham Veterans Administration Hospital. Naparstek received both undergraduate and graduate degrees from the University of Chicago. She maintained her psychotherapy practice for over 30 years and for several years taught graduate students at The Mandel School of Applied Social Sciences, Case Western Reserve University. Earlier in her career, she supervised psychiatry residents at Cambridge Hospital/Harvard Medical School and was Chief of Consultation & Education at the Woodburn Center for Community Mental Health in Fairfax County, VA. She also did a brief stint as a musical comedy actress at Second City and The Tip Top Tap of the Allerton Hotel in Chicago, and says that her musical comedy skills sometimes come in handy for teaching.

I have been listening to B. Naparsteks CD's for 7 years. The Fibromyalgia one and Healthful Sleep are wonderful! I was totaly surprised when I bought the one on Ease Pain, it helps me sleep thru the night! I didn't even realize it was pain keeping me awake. I would say hurry and buy it and help yourself out of pain! Sept 2008 --Marilee (reprinted from Health Journeys website)

I was in tremendous pain from an undiagnosed inflammatory process and I could not sleep without this CD. I listened to it nightly and would listen in the middle of the night and it would help me go back to sleep. Thank you December 2006 --Pat Schultz (reprinted from Health Journeys website)

I have used this cd for years to help me cope with the pain of pancreatitis. It allows me to feel like I have a part in dealing with the pain both in and out of the hospital. I have shared it with others who are also dealing with chronic pain. It is a godsend. Sept 2006 --Betsy (reprinted from Health Journeys website)