Items related to The Scoreless Thai 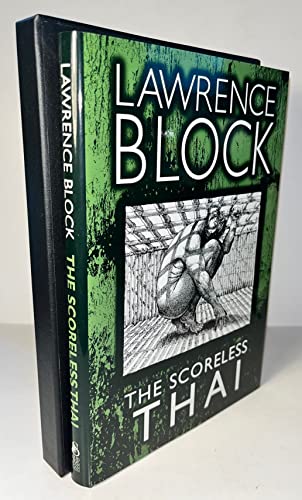 Evan Tanner can't sleep. Ever. Which gives him plenty of free time to get involved in lots of interesting endeavors in all sorts of exotic locales.

Now Tanner's in Thailand with a partially baked plan and a butterfly net, hoping to snare a beautiful missing chanteuse who's metamorphosed into an international jewel thief. Tanner hopes everyone will buy his disguise as a rare butterfly researcher. And everyone does . . .

Except the guerilla band holding him captive. They intend to remove his head when the sun rises, so Tanner must put his fate in the hands of a randy Thai youth who will do anything for a woman, even set a suspected spy free. Soon they're running through the jungle together, chased by bandits, soldiers, and yellow fever, and racing headlong into the heart of darkness—and into the flames of war.

Lawrence Block is one of the most widely recognized names in the mystery genre. He has been named a Grand Master of the Mystery Writers of America and is a four-time winner of the prestigious Edgar and Shamus Awards, as well as a recipient of prizes in France, Germany, and Japan. He received the Diamond Dagger from the British Crime Writers' Association—only the third American to be given this award. He is a prolific author, having written more than fifty books and numerous short stories, and is a devoted New Yorker and an enthusiastic global traveler.

In this first hardcover edition of a 1968 paperback original (titled Two for Tanner), Evan Tanner is "the spy who never sleeps," a Korean War vet whose head injury has destroyed the sleep center in his brain. Never having to sleep, Tanner has plenty of time to become interested in hopeless causes, help oppressed groups, learn obscure languages and travel to exotic locales. The U.S. government has used his undercover talents in the past, but in this fourth novel in the Tanner series he's working for himself. Missing in Thailand is his latest girlfriend, singer Tuppence Ngawa, who is half African and half American and speaks in a bizarre '60s jive. Tuppence and the jazz musicians with whom she was on tour have been kidnapped by Communist rebels, shortly after a major burglary of the Thai royal jewelry collection. Tanner rushes to Tuppence's rescue, only to be taken prisoner by another rebel group in the dense Thai jungle. Tanner escapes from a bamboo cage perched in a tree with the help of a small, comical Thai who believes that somehow Tanner can help him finally find a woman who will relieve him of his virginity. This early Block novel is very much of its time, very '60s, with eerie echoes of the treatment of American POWs in Vietnam. It's still a great pleasure today. (Nov. 8)
Copyright 2000 Reed Business Information, Inc.

Book Description Subterranean, 2000. Hardcover. Condition: New. Dust Jacket Condition: New. Phil Parks (illustrator). 1st Edition. SIGNED BY AUTHOR LAWRENCE BLOCK & the illustrator PHIL PARKS on the Title Page - This is a 1st EDITION/1st PRINTING in NEW and UNREAD condition. This book was only opened at the signing event and then boxed and stored until now. A beautiful collectible copy of this title. Square, crisp copy of this collectible book. NOT REMAINDER MARKED OR PRICE CLIPPED. PHOTOS OF THE ACTUAL BOOK SENT UPON REQUEST. THIS IS AN INTRODUCTORY PRICE FOR OUR GRAND RE-OPENING. ALL PRICES WILL BE ADJUSTED IN FEBRUARY TO REFLECT MARKET PRICES. We combine shipping for multiple purchases. Signed by Author(s). Seller Inventory # 000434