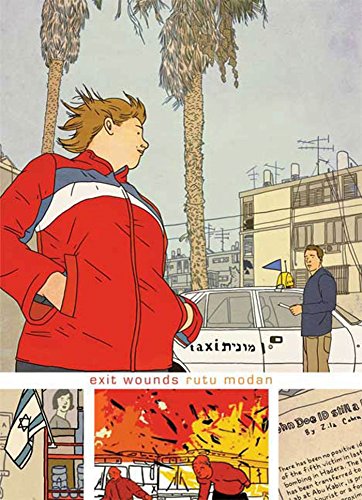 Set in modern-day Tel Aviv, a young man,Koby Franco, receives an urgent phone call from a female soldier. Learning that his estranged father may have been a victim of a suicide bombing in Hadera, Koby reluctantly joins the soldier in searching for clues. His death would certainly explain his empty apartment and disconnected phone line. As Koby tries to unravel the mystery of his father's death, he finds himself piecing together not only the last few months of his father's life but his entire identity. With thin, precise lines and luscious watercolors, Rutu Modan creates a portrait of modern Israel, a place where sudden death mingles with the slow dissolution of family ties.

Exit Wounds is the North American graphic-novel debut from one of Israel's best-known cartoonists. Modan has received several awards in Israel and abroad, including the Best Illustrated Children's Book Award from the Israel Museum in Jerusalem four times and Young Artist of the Year by the Israel Ministry of Culture. She is a chosen artist of the Israel Cultural Excellence Foundation.

RUTU MODAN graduated from the Bezalel Academy of Art and Design in Tel Aviv, where she lives. A member of the Israeli comics group Actus Tragicus, she has done illustrations for children's books as well as for The New York Times, The New Yorker, and Le Monde. This is her first graphic novel.

Grade 10 Up–This first graphic novel from an award-winning Israeli illustrator tells the story of Koby Franco, a 20-something cab driver working in Tel Aviv. Franco's everyday life screeches to a halt when he receives a phone call from a soldier claiming his estranged father was killed by a suicide bomber at a train station. He and the young woman enter into a journey that takes them through cemeteries, train stations, and Franco's father's disheveled apartment to determine whether the man is dead or alive. The black-and-white artwork, with its thin lines accented by simple watercolor brushstrokes, combines with precise dialogue to convey subtle and powerful emotions throughout the story. Limited depictions of sex, nudity, and violence both in the story and the pictures make this a work that confronts mature themes in an emotionally complex manner. Franco's journey draws a portrait of modern Israel, showing how people cope with the violence around them as they go about their day-to-day lives. Modan doesn't shy away from criticizing some of the attitudes the state of Israel holds, hinting that these exacerbate some of the problems with the Palestinians. But the core of the story rests on Franco dealing with not only all the anger he feels toward his father, but also with the realization that he still loves him and has much to learn from him. An accomplished and moving book.–Matthew L. Moffett, Pohick Regional Library, Burke, VA
Copyright © Reed Business Information, a division of Reed Elsevier Inc. All rights reserved.