Items related to Even the Rain

Paul Laverty Even the Rain 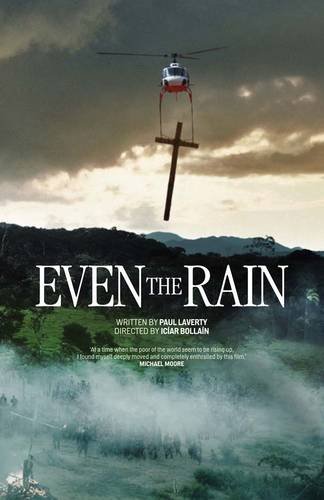 Costa and Sebastian arrive in Cochabamba, Bolivia, to shoot a period film about Columbus's arrival in the Americas. Sebastian, the director, wants to upturn the entire conservative myth of Western Civilisation's arrival in the Americas as a force for good. His story is about what Columbus set in motion; the obsession with gold, the hunt for slaves by Spanish mastiffs, and punitive violence to those Indians who fought back. Costa, the producer, doesn't care what happened yesterday never mind five centuries ago, he just wants to get the job done on time and within budget. The battle to get their film made intertwines with the fight of their Bolivian crew members, deprived of their most basic rights, prohibited from collecting even the rain. As Sebastian and Costa struggle with their film, the violence in the community in which they shoot increases by the day until the entire city explodes into the now infamous Bolivian Water War of April 2000. Five hundred years after Columbus, sticks and stones confront the steel and gunpowder of a modern army. David against Goliath once again. Only this time they fight not about gold, but the simplest of life-giving elements: water. Features full screenplay with extra scenes and introductions from Paul Laverty and Iciar Bollain. Winner, Audience Award, Berlin Film Festival 2011 Bridging Borders Award, Palm Springs International Film Festival Four Progressive Film Awards Thirteen Goya Award Nominations Spain's Official Entry for the 2011 Academy Awards

Paul Laverty's concern for social issues led him to work for a human rights organisation in Nicaragua. His experiences in Central America took him away from his work as a lawyer in Scotland and inspired him to write the script for Carla's Song, his first film with Ken Loach. Carla's Song was to be the beginning of one of the most prolific professional relationships in contemporary cinema. A Palme d'Or and nine films written by him and directed by Ken Loach have won Paul Laverty recognition as an acclaimed scriptwriter.