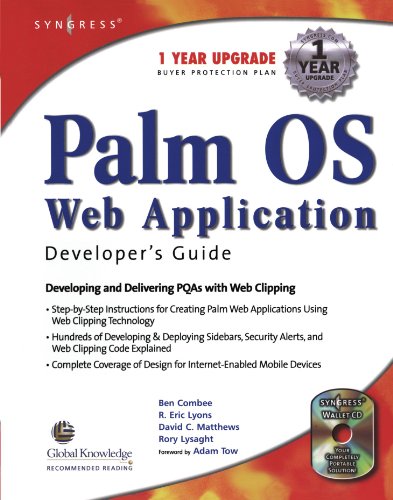 With an 80% hand-held device market-share, the Palm Organizer is the platform of choice for Mobile Internet application developers.

With its decision to license the Palm OS to rival device manufacturers such as Sony, Motorola, and Handspring, Palm has further strengthened its claim as the industry standard for Mobile Computing architecture.

Palm OS Web Application Developers Guide provides step-by-step instructions on how to migrate existing HTML to the Palm platform. The book will be useful for webmasters looking to convert current web pages. It is also ideal for C and Java programmers interested in building more dynamic applications from the ground up.

The CD-ROM includes all the source code from book, PQA executable file and Palm OS emulators
A timely release: With 8 million devices in use, thousands of developers are moving into this lucrative market
Topic appeals to many segments of the market, including application developers, Internet Service Providers, and HTML proficient power-users
Covers Web Clipping which has the power to convert existing HTML to the PQA format
Focuses on the key challenges of creating web pages for a small viewing area in black and white

Ben Combee is a Lead Software Developer at Metrowerks where he is responsible for the future direction of the CodeWarrior for Palm OS tools, the leading C and C++ development toolset used in the Palm community. Ben is also working on future wireless strategy for Metrowerks and its parent company, Motorola. In the past, he was the lead architect for wireless devices with Veriprise Wireless where he developed custom applications and libraries for the Palm VII/VIIx, Omnisky Minstrel, and Glenarye @ctiveLink wireless systems. His application, VChat, won "Best INetLib Application" in the PalmHack contest at the 2000 PalmSource show. Ben has also been the lead developer for the CodeWarrior C/C++ compiler for Intel and AMD microprocessors, and he presented a talk about Linux compiler technology at the 1999 Annual Linux Showcase. Before this, he helped design microcontrollers and operating systems for Motorola's advanced pager products. Ben has a Bachelors of Science in Computer Science from the Georgia Institute of Technology. While at Georgia Tech, Ben served as the president of the Association for Computing Machinery (ACM) chapter for two years. Ben is an active participant in Palm's online developer forums, having answered over 600 questions posted by fellow Palm developers. Ben lives in Austin, TX.