Items related to Recovering From Racism 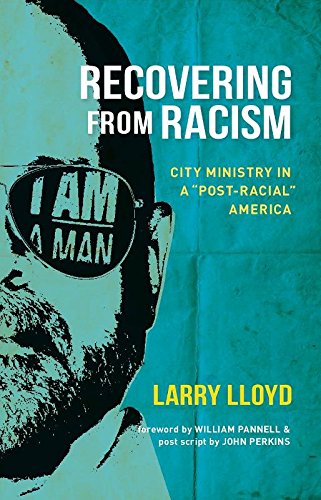 Recovering From Racism: City Ministry in a "Post-Racial" America is a story about how Larry Lloyd, a privileged white Evangelical, grew to love his city, particularly the city that so many don t want to see. A pioneer in urban Ministry, Lloyd has helped countless others love the city, too. This book is about his story and how that story can inform each of us as we seek the well-being of the city to which God has called us. But first we have to see the city as God sees it. We have to look at our own heart and motivations for engaging the city, particularly as we engage neighborhoods that are in downward spirals. Paternalism, racism, and white privilege can blind us if we are not careful and our engagement can quickly turn to cynicism and frustration. But this book is not just for urban warriors. It s for each of us who dare to embrace the city as God s playground. It s for each of us who seek meaningful engagement in the middle of society s toughest issues. It s for each of us who want to be agents of God s grace and justice in our own city.

After starting Memphis Young Life Urban Ministries in 1975, Larry went to Fuller Seminary to develop an urban youth ministry curriculum, training urban churches in youth ministry. He returned to Memphis in 1987 to create the Memphis Leadership Foundation which has birthed over 30 inner city programs in youth outreach, housing/economic and community development, health services, and urban education.

1. Recovering from Racism : City Ministry in a Post Racial America

Book Description Engage Faith, 2014. Condition: Good. A+ Customer service! Satisfaction Guaranteed! Book is in Used-Good condition. Pages and cover are clean and intact. Used items may not include supplementary materials such as CDs or access codes. May show signs of minor shelf wear and contain limited notes and highlighting. Seller Inventory # 1936672863-2-4

Book Description Engage Faith, 2014. Condition: Good. Shows some signs of wear, and may have some markings on the inside. Seller Inventory # GRP118568097

Book Description Engage Faith, 2014. Paperback. Condition: GOOD. Has little wear to the cover and pages. Contains some markings such as highlighting and writing. Seller Inventory # 1936672863_abe_gd