Items related to Molly and the Bear

Bob Scott Molly and the Bear

Molly and the Bear 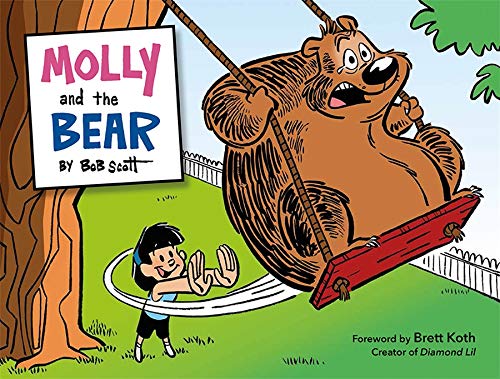 Molly and the Bear is a comprehensive overview of the first 10 years of Bob Scott's popular syndicated web comic. Featuring more than 400 of Bob's personal favorite comic strips, this book showcases the quick-witted humor and delightful art that has garnered Molly and the Bear its strong and loyal fan base. The charming cast of characters, all drawn in Bob's distinctive and endlessly entertaining style, starts with Bear, an 800-pound wild bear who is afraid of everything and allergic to his own fur. He meets Molly, an 11-year-old girl who becomes his best friend and main therapist, and with her help, Bear becomes a permanent part of the Henderson family. Though living with a bear is not always easy, it makes every day an adventure filled with silly, heartwarming, hilarious moments.

Bob Scott is a veteran of the animation industry having worked at all the major studios including Disney, Pixar, DreamWorks, and Warner Brothers. A talented and capable cartoonist, he brings his characters to life on the page like no one else­--with a particular flair for getting inside the head of an easily confused, angst-ridden bear--and as a special bonus, the book includes a step-by-step peek into Bob's creative process. There's truly never been a better way for new and longtime fans alike to delve into the art, fun, and hilarity of Bob Scott's Molly and the Bear.

Molly and the Bear perfectly showcases Bob Scott's humor and charm and brings his amazing animation talent to the comics. Lucky comics!" --Chris Buck, co-director of Frozen, Surf's Up and Tarzan

"Molly and the Bear is a beautifully illustrated comic strip with a ton-and-a-half of heart. Bob Scott is a guy who loves his craft--his cartoon references will certainly keep comics buffs on their toes! Bob's also a huge talent--he contributed to some of the best projects we ever did at the Garfield studio. So, please sit back, relax and enjoy Molly and the Bear!" --Jim Davis, creator of Garfield

"I'm sure that if Bob's comics had been around in the days I scoured the funny papers for cartoons to copy, my sketch pads would have been filled with Mollys and Bears" --Kevin Lima, director of Enchanted, 102 Dalmatians and co-director of Tarzan

"Bob Scott has reached back in time and captured what still makes today's readers smile and chuckle with Molly and the Bear. It's the kind of comic strip for which I couldn't wait for my dad to finish reading the paper!" --Brenda Chapman, co-director of Brave and The Prince of Egypt

"Only haters of kids, furry animals and gentle humor would refuse to buy this book." --Jim Reardon, co-writer of WALL-E and director of The Simpsons (T.V. series)

"Disney story artist Bob Scott has been drawing a delightful comic strip, Molly and the Bear, for the past few years. It's worth a read any ol' time..." --CartoonBrew.com

"Comic strips rarely have the life that Molly and the Bear does, but coming from a seasoned professional who has worked on the very best that Disney, Pixar and DreamWorks has to offer, we'd expect nothing less. Truly, the characters in this strip look like they've jumped right off of a story-board sequence for their next animated short."--DigitalStrips.com

"Bob Scott brings his unique style to this online comic creating a fun lovable family and a story that just leaves you smiling as you read each new strip." --WebComicAlliance.com

Bob Scott lives in both the world of comic strips and animation. Born in Detroit, he taught himself cartooning, emulating the masters in the funny pages. Acceptance and graduation from California Institute of the Arts opened the world of character animation for Bob. He has worked over 30 years in the industry as an animator, character designer, storyboard artist and voice talent. His credits can be found on projects from Marvel’s Muppet Babies, Turner Animation’s Cat’s Don’t Dance and Pixar’s The Incredibles. He has worked for Jim Davis, co-penciling U.S. Acres and co-directing Garfield: His 9 Lives. His heart has always wanted a comic strip of his own, and so Molly and the Bear was born in 1997 and became a syndicated webcomic in 2010. Scott lives in Burbank, CA.

1. Molly and the Bear

2. Molly and the Bear

3. Molly and the Bear