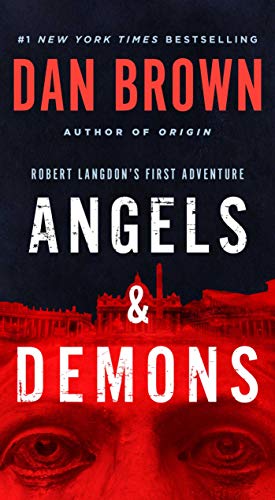 An ancient secret brotherhood. A devastating new weapon of destruction. An unthinkable target.

When world-renowned Harvard symbologist Robert Langdon is summoned to a Swiss research facility to analyze a mysterious symbol, he discovers evidence of the unimaginable: the resurgence of an ancient and powerful secret brotherhood known as the Illuminati—which has its sights on its longtime enemy: the Catholic Church.

Desperate to save the Vatican, Langdon joins forces in Rome with the beautiful and mysterious scientist Vittoria Vetra. Together, they embark on a frantic hunt through sealed crypts, dangerous catacombs, deserted cathedrals, and the most secretive vault on earth—the long-forgotten Illuminati lair which houses the only hope for the salvation of the Catholic Church.

“A breathless, real-time adventure” (San Francisco Chronicle), Angels & Demons is an unputdownable and whip-smart thriller that careens from enlightening epiphanies to dark truths as the battle between science and religion turns to war.

Dan Brown is the #1 New York Times bestselling author of Origin, The Da Vinci Code, Digital Fortress, Deception Point, The Lost Symbol, Angels & Demons, and Inferno. He is a graduate of Amherst College and Phillips Exeter Academy, where he spent time as an English teacher before turning his efforts to writing full-time. He lives in New England with his wife. Visit his website at DanBrown.com.