Items related to One-Man Show: The Life and Art of Bernard Perlin

One-Man Show: The Life and Art of Bernard Perlin 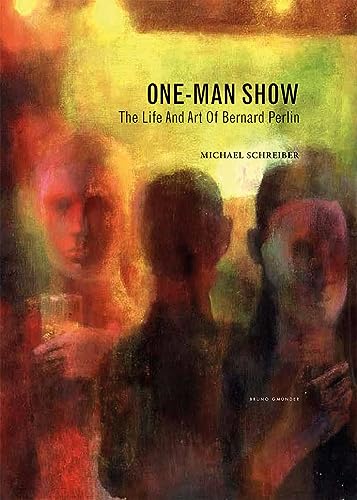 A 2017 STONEWALL HONOR BOOK (THE AMERICAN LIBRARY ASSOCIATION)AND LAMBDA LITERARY AWARD FINALIST
Bernard Perlin (1918-2014) was an extraordinary figure in twentieth century American art and gay cultural history, an acclaimed artist and sexual renegade who reveled in pushing social, political, and artistic boundaries. His work regularly appeared in popular magazines of the 1940s, fifties, and sixties; was collected by Rockefellers, Whitneys, and Astors; and was acquired by major museums, including the Smithsonian, the Museum of Modern Art, and the Tate Modern. His portrait clients included well-known literary, artistic, theatrical, political, and high society figures. As a government propaganda artist and war artist-correspondent, he produced many now-iconic images of World War II. From the 1930s on, he also daringly committed to canvas and paper scenes of underground gay bars and nude studies of street hustlers, among other aspects of his active and dedicated gay life.
Socially, he moved in the upper echelons of New York gay society, a glittering "cufflink crowd" that included George Platt Lynes, Lincoln Kirstein, Glenway Wescott, Monroe Wheeler, Paul Cadmus, Jared French, George Tooker, Pavel Tchelitchew, Truman Capote, Leonard Bernstein, Arthur Laurents, and Jerome Robbins. He also counted among his most intimate companions such luminaries in the arts as Vincent Price, Clifton Webb, Ben Shahn, Samuel Barber, Gian Carlo Menotti, Aaron Copland, Christopher Isherwood, Don Bachardy, Martha Gellhorn, Betsy Drake, Muriel Rukeyser, Carson McCullers, Philip Johnson, and E.M. Forster. Yet he was equally at home in the gay underworlds of New York and Rome, where his unbridled sexual escapades put him in competition with the likes of Jean Genet and Tennessee Williams.

Bernard Perlin led a full and fearless life as a gay artist. He is an important and yet often overlooked artist of our time. From early in his career, his prodigious talent allowed him to support himself as an artist from the sale of his drawings and paintings, as well as commissions, the first of which was done for the legendary movie actor Vincent Price. His work is now in every major institutional collection.

Like many of his generation, Perlin explored his personal side in dangerous and sometimes unsavory situations. He saw men as "packages of pleasure," an inclination he proudly believed originated from deep within his DNA--a human desire so evident in the work he made. One only has to look at the drawings he made for the US Office of War Information to sell war bonds or the illustrations he made for magazines such as Life and Fortune to appreciate his point of view.

In Rome and Paris, he visited the underground gay bars of the 1940s and 1950s, running into Tennessee Williams, Truman Capote, and Gore Vidal. He competed with Jean Genet for (and won) the attention of a young man at the notorious cruising spot at the base of Spanish Steps in Rome. He even found himself imprisoned in de Gaulle's Paris for "behavior against public decency."

He was active in the gay Greenwich Village scene in the 1950s that included outdoor cruising spots, underground gay bars, and bathhouses. When he was in his 50s and 60s, he was unafraid to befriend and have sexual relations with men in their 20s. Later in life, at age 91, he legally married his longtime partner as a "political statement." He led a life that put him squarely in the middle of the Paul Cadmus and Jared and Margaret French circle. He chummed around with Glenway Wescott, Monroe Wheeler, Gian Carlo Menotti, Leonard Bernstein, Liz Smith, Grace Hartigan, Don Bachardy, David Hockney, Casey Donovan, Jerome Robbins, Arthur Laurents,and Lincoln Kirstein. He was a great friend of George Platt Lynes, from whom he received an inheritance. He was someone who had the standing to say Roy Cohn was "really hideous in person" or to spend time with Robert Mapplethorpe in his "male impersonator outfit."

While in his early 90s, living in self-exile (he "hated the art world") in Connecticut, he sat with Michael Schreiber and spent countless hours telling his life story, a rich yet uncomplicated tale. Perlin's life, in his own words, was a direct path to making art and seeking human connection. At times each was messy, but without question, they were successful and rewarding.

Michael Schreiber proved himself able to go one-on-one with this artistic titan, earning Perlin's trust to record his story for all time. In One-Man Show, Schreiber terrifically husbands Bernard Perlin's uniquely 20th century story for a 21st-century audience, allowing this gay artist to show his true, fearless self with warmth, humor, and humanity.

Michael Schreiber is a teacher and writer based in Chicago. As curator for the estate of Bernard Perlin, he has organized several exhibitions of the artist’s work as well as the online gallery, www.BernardPerlin.com. With his husband Jason Loper, Schreiber also regularly contributes to the popular blog This American House, which chronicles their adventures restoring their Frank Lloyd Wright-designed home in Iowa. One-Man Show: The Life and Art of Bernard Perlin is Michael Schreiber’s first book.

1. One-Man Show: The Life and Art of Bernard Perlin

2. One Man Show The Life & Art of Bernard Perlin