Items related to Cinema of Enchantment. 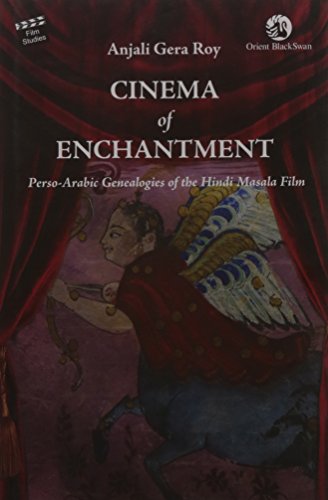 1. Cinema of Enchantment : Perso-Arabic Genealogies of the Hindi Masala Film

3. Cinema of Enchantment : Perso-Arabic Genealogies of the Hindi Masala Film

Book Description PAPERBACK. Condition: New. Book Cover and ISBN may be different from US edition but contents as same US Edition. Excellent Quality,Quick delivery, We may ship the books from Asian regions for inventory purpose. Our courier service is not available at PO BOX. Seller Inventory # abe_9788125059660

6. Cinema of Enchantment: Perso-Arabic Genealogies of the Hindi Masala Film

Book Description Orient BlackSwan, 2015. Hardcover. Condition: New. 1st Edition. Contents: 1. Introduction: Bhakti or Ashiqi? 2. The Urdu Sha ir [Poet], Sha iri [Poetry] and the Ganga-Jamuni Tehzeeb [Ganga-Jamuni Culture]. 3. Qissa-i-Laila Majnun, Ishq and Romance in Hindi Cinema. 4. Shehzadas, Houris, Divs and Djinns. 5. Ajeeb Dastan Hai Yeh [It is a Strange Tale Indeed]: Storytelling in Hindi Cinema. 6. Waqt ki Har Sheh Ghulam [Everything is Subject to Destiny]: Time in Hindi Cinema. 7. Filmistan: The Land of Films. 8. The Cinema of Enchantment. 9. Towards an Alternative Aesthetic of the Hindi Masala Film. Index. A fascinating account of the theatrical beginnings of Bollywood and the Indo-Islamic storytelling traditions of the subcontinent, the volume looks at how Islamicate cultures have richly informed and structured mainstream Hindi cinema. It tells us how it was Urdu which provided the language of quintessential romance, passion and poetry for it. Acknowledging the central contribution of Hindu mythology, narrative visual arts and epics on storytelling in film, the volume isolates Bollywood s generic debt to the Perso-Arabic legacies of tilism or enchantment, qissa and dastan, which have been marginalised in the construction of popular Hindi cinema as national cinema. It looks at the structure and narrative form of Orientalist genres of the Silent period, stunt films, costume dramas, and their continuity in the masala film of the 1960s and 1970s. As opposed to the lens of fantasy through which the dream-world of Hindi cinema has been traditionally perceived, it suggests that tilism may provide a framework for examining its magical and enchanting universe. The influence of Urdu writers, pre- and post Partition, Urdu poetry and Sufism on film scripts, dialogue and music ensured that the language of Firdausi, Ghalib and Zafar lived on in popular imagination. Bollywood, thus, provided one of the last havens for preserving and performing India s famed syncretic Ganga-Jamuni tehzeeb -wherein Hindi and Urdu are not two but are deeply implicated in one another-even as it disappeared from other public spaces. The volume is addressed to students and scholars in the fields of cinema, culture and media studies, film history. Any reader interested in Hindi films and popular culture would also find it engaging and insightful. Seller Inventory # 116260

Shipping: US$ 20.59
From United Kingdom to U.S.A.
Destination, rates & speeds