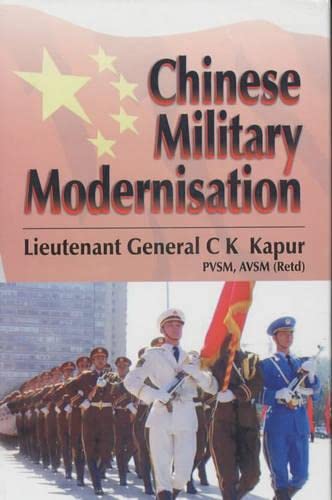 The impact of China's defence modernisation on India's national security would be profound and direct. Are India and China natural rivals?

holds the Arleigh A. Burke Chair in Strategy at CSIS. He is also a national security analyst for ABC News, a frequent commentator on National Public Radio and the BBC, and the author of more than 45 books on security policy, energy policy, and the Middle East, including Iran's Weapons of Mass Destruction: The Real and Potential Threat (CSIS, 2006). Martin Kleiber is a researcher with the Burke Chair at CSIS. He has worked on security sector reform and nuclear nonproliferation at the German Foreign Office in Bosnia and at the United Nations. He has written on the nuclear nonproliferation regime and Iran, as well as on U.S. foreign and defense policy.

Book Description PAPERBACK. Condition: New. Book Cover and ISBN may be different from US edition but contents as same US Edition. Excellent Quality, Service and customer satisfaction guaranteed! We may ship the books from Asian regions for inventory purpose. Our courier service is not available at PO BOX. Seller Inventory # abe_9788170491590

Book Description Manas, 2003. Hardbound. Condition: New. Contents: Preface. 1. Introduction. 2. The socio-economic developments. 3. Defence modernisation-the prelude. 4. Changing security doctrines. 5. PLA' s modernisation. 6. PLA in decision making. 7. Chinese intelligence system.8. Information warfare and special operations. 9. Defence industries. 10. PLA's logistics support system. 11. China's activities in India's neighbourhood. 12. Developments in Tibet. 13. China as a strategic challenge. 14. India's response. 15. Conclusion. Bibliography. Index. " The phenomenal growth of the Chinese economy and its military might during the later part of the Twentieth Century are the two most significant events with global ramifications. Napoleon's prophetic words that China was a sleeping giant, which when wakes up will shake the whole world has proved accurate. With its fanatic national fervour, China is all set to achieve its legitimate place-the Middle Kingdom syndrome-in the emerging multipolar world order by 2050 AD. The most effective tool to achieve this is the Chinese Armed Forces-the PLA. Historically and traditionally, the centrality of the PLA in China's internal and external policies has always remained unquestioned. "China has recently embarked on a massive systematic programme for the modernisation of its Defence Forces. Its short and long term objectives are yet to be assessed. The question now is,will a modernised professional military dance to the tune of the Chinese Communist Party? The impact of China's Defence modernisation on India's national security would be profound and direct. Are India and China 251 pp. Seller Inventory # 48968