Items related to The Summa Perfectionis of Pseudo-Geber: A Critical... 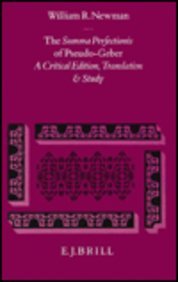 Alchemy was a subject of no small controversy in the Middle Ages. To some scholastics, alchemy seemed to arrogate the power of divinity itself in its claim that man could replicate the products of nature by means of art; others viewed alchemy as a pure technology, unworthy of inclusion in a curriculum devoted to the study of scientiae. The Summa perfectionis of Pseudo-Geber, written around the end of the 13th century as a defense of the art, became `the Bible of the medieval alchemists,'and was still being used as late as the 17th century. The present work contains a critical edition, annotated translation, and commentary of the Summa.