Items related to Chinese Propaganda Posters : From Revolution to Modernizatio... 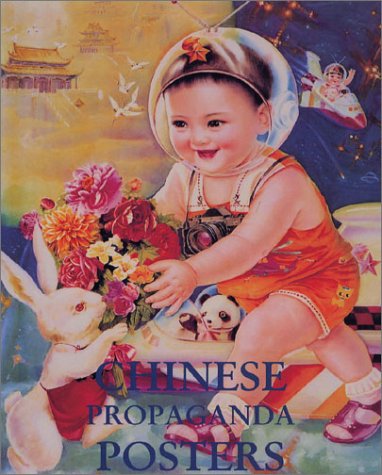 With his smooth, warm, red face which radiated light in all directions, Chairman Mao Zedong was a fixture in Chinese propaganda posters produced between the birth of the People's Republic in 1949 and the early 1980s.

These infamous posters were, in turn, central fixtures in Chinese homes, railway stations, schools, journals, magazines, and just about anywhere else where people were likely to see them. Chairman Mao, portrayed as a stoic superhero (a.k.a. the Great Teacher, the Great Leader, the Great Helmsman, the Supreme Commander), appeared in all kinds of situations (inspecting factories, smoking a cigarette with peasant workers, standing by the Yangzi River in a bathrobe, presiding over the bow of a ship, or floating over a sea of red flags), flanked by strong, healthy, ageless men and "masculinized" women and children wearing baggy, sexless, drab clothing.

The goal of each poster was to show the Chinese people what sort of behavior was considered morally correct and how great the future of Communist China would be if everyone followed the same path toward utopia by uniting together. Combining fact and fiction in a way typical of propaganda art, these posters exuded positive vibes and seemed to suggest that Mao was an omnipresent force that would accompany China to happiness and greatness.

This book brings together a selection of colorful propaganda artworks and cultural artifacts from photographer Michael Wolf's vast collection of Chinese propaganda posters, many of which are now extremely rare. Michael Wolf has lived in Hong Kong for eight years and works as a photographer for Stern. He collects posters and photographs from the period of the Cultural Revolution till today. (http://www.photomichaelwolf.com)

The authors:
Stefan R. Landsberger holds a PhD in Sinology from Leiden University, Netherlands. He is a Lecturer at the Documentation and Research Centre for Modern China, Sinological Institute, Leiden University, and one of the editors of the journal China Information. Landsberger has one of the largest private collections of Chinese propaganda posters in the world. He has published extensively on topics related to Chinese propaganda, and maintains an extensive website exclusively devoted to this genre of political communications.

Anchee Min was born and raised in Mao's China. A staunch party supporter, she was awarded the lead role in a film to be made by Mao's wife, Jiang Ching, but the death of Mao soon after caused the film to be cancelled. In 1984, Min emigrated to the United States and later wrote the bestselling biography Becoming Madame Mao.

Poet and fiction writer Duo Duo was born in Beijing, China in 1951 and emigrated in 1989, later settling in the Netherlands, where he became a writer in residence at the Sinological Institute of Leiden University. He is considered one of the most outstanding poets to emerge after the Cultural Revolution.