Items related to Valley of the Golden Mummies

Valley of the Golden Mummies 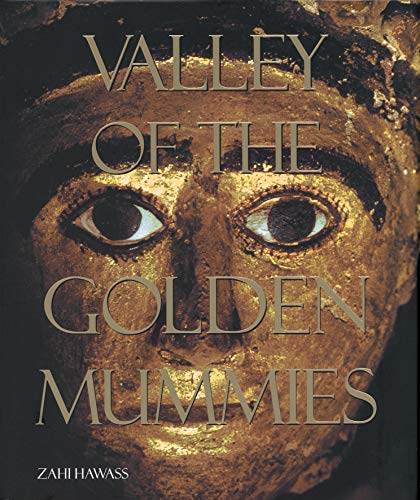 The astonishing discovery of the Valley of the Golden Mummies in Bahariya Oasis, deep in the Western Desert of Egypt, is considered perhaps the most spectacular Egyptian archeological discovery since that of Tutankhamun's tomb. This vast site was uncovered by accident, when a donkey stumbled into the opening of one of the many underground tombs of a 2,000-year-old cemetery believed to cover approximately two square miles. Never before have so many mummies been discovered at a single site: multi-chambered tombs dating from the Roman period in Egypt held rows of mummies, many adorned with gilded masks and painted cases, others wrapped in linen. Whole families were found placed together. Jewelry, pottery, amulets, and other artifacts were also uncovered, and it is estimated that as many as 10,000 mummies may ultimately be uncovered from the site, which has escaped plunderers and is thus remarkably intact.
Featuring some 250 color illustrations, most of which have never before been published, this exciting book reveals the lives, customs, and religious beliefs of this until now little-known community. It will both fascinate and enthrall all those with an interest in the ancient history of Egypt.

In the winter of 1996, a guard at the temple of Alexander the Great near Bahariya, Egypt, reported an astounding discovery: during a routine patrol, he had been startled when the donkey he had been riding fell into a hole. Helping the donkey out of its predicament, the guard saw that the hole was in fact an opening into a tomb--and one from which a mummy's golden face peered.

Zahi Hawass, the director general of the Giza Pyramid complex and a leading Egyptian archaeologist, hurried to the site, which turned up more and more of those golden-masked corpses--105 in the first year of excavation alone, the largest number of mummies yet discovered at a single Egyptian site. Hawass's book describes the site and its contents, which offer material evidence of daily life at the Bahariya Oasis during the 25th and 26th dynasties, a time about which little is now known. Gaps in the historical record are quickly being filled, however, thanks to Hawass's ongoing findings, only a fraction of which are reported in his book. He guesses that the Valley of the Golden Mummies may eventually yield more than 10,000 perfectly preserved corpses and a wealth of information about their time.

The richly illustrated text also provides a detailed account of the work of modern Egyptologists, who accord their subjects a respect not often shown by earlier generations of field workers; as Hawass remarks, "We always treat a mummy as if it were still a person, just as we would hope to be treated ourselves in similar circumstances." It's an altogether fascinating excursion into long-ago times. --Gregory McNamee

ZAHI HAWASS, secretary general of the Supreme Council of Antiquities in Cairo, received his Ph.D. from the University of Pennsylvania and has been excavating in Egypt for over thirty years. In addition to his numerous scholarly publications, he is the author of several best-selling popular books.

1. Valley of the Golden Mummies