Items related to Ten Sticks and One Rice

Ten Sticks and One Rice 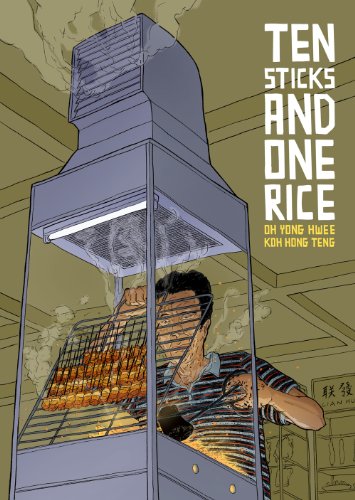 Illegal bookie. Secret society member. Street hawker. Neo Hock Seng is all of these, and more. As Singapore transforms from a kampong to a cosmopolitan city, Hock Seng struggles to make sense of life and eke out a living, even as he finds his old ways and values increasingly challenged.

Koh Hong Teng is a comic artist and painter based in Singapore. He published the graphic novel Gone Case Book 1 and 2 with writer Dave Chua in 2010 and 2011 respectively. In 2011, he was one of the recipients of the Arts Creation Fund from the National Arts Council. In 2012, he was commissioned by the National LibraryBoard to illustrate a 16-page comic story for the irememberSG project. He is also an external examiner at Nanyang Academy of Fine Arts for final year projects in Illustration Design.

Oh Yong Hwee is the CEO and Creative Director of Patroids Creative Works, a Singapore-based creative agency. He enjoys the challenge of conceptualising ideas that blend creativity and technology, and has won awards and accolades at the local, regional and international stage. In July 2011, Yong Hwee and Hong Teng were invited by The Straits Times to imagine how a Singapore superhero would be like. Yong Hwee earned his BSc in Computing from the University of London while serving as a naval officer in the Singapore Navy.