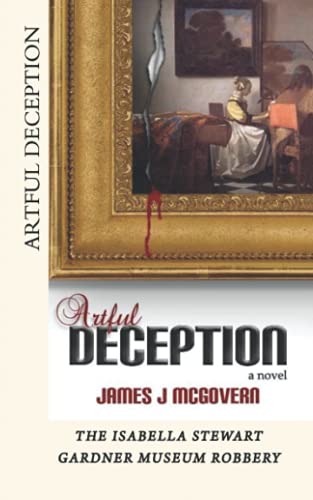 A real who-dunit in the City of Boston. Was it a serious lapse in judgment or was it intentional? In truth, it matters not. What does matter is that a solitary act by a college student, babysitting Millions of Dollars’ worth of art, in the early morning hours of March 18, 1990, resulted in the theft of thirteen priceless works from the Isabella Stewart Gardner Museum. With the push of a button, the Museum in the Fens lost part of its soul when it was piundered by ruthless thieves. Theories swirl even today, about who was behind it and why the paintings haven't been found. Countless people have written on the subject and yet over twenty years later, still no answers. Until now. Artful Deception is unlike anything else ever written about the heist. It is told from a unique perspective in that it focuses on a crime alliance that purposely seeks no limelight, notiriety or scrutiny from law enforcement, friend or foe. They say little, seek help from no one and are fearful of the press. For once, in the annals of Boston crime, the usual suspects from Southie and the North End were not rounded up after the robbery. Why? Because they didn't have a clue about it until after it went down. When Jimmy "The Tooth" Kelly, Frankie "The Shanks" Martell and Sal "The Clam'' DePasquale found out about it and how much the loot was worth, they desperately wanted a piece of the action. Instead, they hit a stonewall. Questions surrounding the mystery are endless. If it wasn't the Irish or the Italian mobsters, then who was it? Why were some paintings taken and not others? Was it an inside job? Was it payback by someone who had it in for the FBI, the Boston Irish, or the Italian mob? Were people being protected and if so, why? Who was in charge of the Boston field office in 1990? Was McGrath ever close to solving the case? What did the United States Attorney do to try to solve it. Was the Strike Force looking at it? Who was McGrath's boss at the time? Why weren't there any Boston police cruisers seen in the area during their routine patrol? Why didn't the two robbers disguise themselves?Why was one guard able to fall asleep and the other couldn't because he was petrified about what might happen to them? How did the thieves know the layout of the museum's convoluted basement...were they schooled or had they been there before? Fasten your seatbelts and get ready for a fast-paced, spell-binding story of political scandal, deceipt, public corruption and deception, as you join FBI agent Ted McGrath and his crew in their quest to recover the paintings. While McGrath, Savage, Fenore, agent Mullen and Attorney Fowler try to keep the momentum going, certain people in places of power want the group to fail. As progress is made in the twenty year old mystery, it becomes clear to McGrath and Fowler, that someone is equally determined to stymie the investigation and desperately wants sins of the past to remain in the vault. The convoluted twists and turns of the maze-like investigation, will have your head spinning, while the ebb and flow of emotion, frustration, anger, disgust and loathing, will have you talking to yourself. Once immersed in this incredible story, the pages can't be turned fast enough to see where the mission next takes McGrath's "Amigo's", what obstacles they face, the risks they must take and what they finally accomplish as a team, turning what appeared to all to be simply a Fool’s Errand, into an incredible masterpiece of detective work.

James McGovern is a New England native, a Suffolk University Law School graduate, an active member of Boston’s legal community and a committed Red Sox fan. While serving with the United States Attorney’s Office in Boston in 2006, McGovern was given the extraordinary opportunity to take a second look at the FBI's cold case of the Gardner Museum heist, the largest art theft in US history. Artful Deception, a work of historical fiction, was written with the specific intent to turn what has been largely a local story into a worldwide, electronic appeal for assistance in recovering the stolen art. McGovern introduces FBI agent Ted McGrath and his summer intern Katherine Savage to help solve the incredible story of this real-life who-dun- it in the City of Boston. Born and raised in Providence, Rhode Island. He is a member of the Sons of Irish Kings has three grown children and lives with his wife, Lynn and a persnickety calico named Frankie. McGovern is currently working on his second novel, a medical mystery featuring the return of McGrath and Katherine Savage.