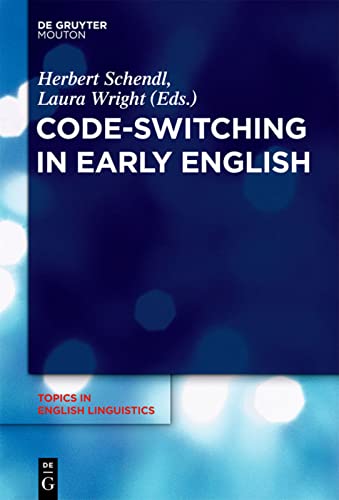 Synopsis: The complex linguistic situation of earlier multilingual Britain has led to numerous contact-induced changes in the history of English. However, bi- and multilingual texts, which are attested in a large variety of text types, are still an underresearched aspect of earlier linguistic contact. Such texts, which switch between Latin, English and French, have increasingly been recognized as instances of written code-switching and as highly relevant evidence for the linguistic strategies which medieval and early modern multilingual speakers used for different purposes. The contributions in this volume approach this phenomenon of mixed-language texts from the point of view of code-switching, an important mechanism of linguistic change. Based on a variety of text types and genres from the medieval and Early Modern English periods, the individual papers present detailed linguistic analyses of a large number of texts, addressing a variety of issues, including methodological questions as well as functional, pragmatic, syntactic and lexical aspects of language mixing. The very specific nature of language mixing in some text types also raises important theoretical questions such as the distinction between borrowing and switching, the existence of discrete linguistic codes in earlier multilingual Britain and, more generally, the possible limits of the code-switching paradigm for the analysis of these mixed texts from the early history of English. Thus the volume is of particular interest not only for historical linguists, medievalists and students of the history of English, but also for sociolinguists, psycholinguists, language theorists and typologists.