Items related to Caribbean Creolization: Reflections on the Cultural... 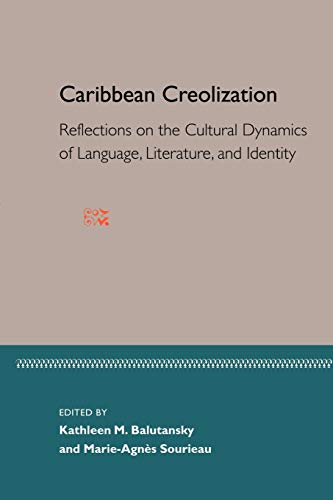 Caribbean Creolization: Reflections on the Cultural Dynamics of Language, Literature, and Iden

Title: Caribbean Creolization: Reflections on the ...

This volume brings together prominent writers from the English, French, Spanish, and Dutch speaking Caribbean in an examination of creolization and its impact upon the region’s literary production.  It is especially noteworthy for the broad spectrum of Caribbean nationalities it includes: writers from Cuba, Curacao, the Dominican Republic, Grenada, Guadeloupe, Guyana, Haiti, Jamaica, Martinique, Panama, Suriname, and Tobago.  Together, they are engaged in redefining Caribbean identity and esthetics, and their reflections on this process trace the evolution of a dynamic regional literature and identity out of materials displaced amid the movement of colonial empires and nationalistic and economic upheavals.

The collection addresses a number of controversial issues, among them the survival of racism in mestizaje cultures of Hispanic nations of the Caribbean, the opposing theories of the history and development of Papiamento and Haitian Creole, and the role of Creole languages in the production of consciousness and literature.
Contents
Antillean Journey, by Daniel Maximin
Part I: Creolization and the Creative Imagination
Creoleness: The Crossroads of a Civilization? by Wilson Harris
The Caribbean: Marvelous Cradle-Hammock and Painful Cornucopia, by Carlos Guillermo Wilson
Who's Afraid of the Winti Spirit? by Astrid H. Roemer
Three Words toward Creolization, by Antonio Benítez-Rojo
Dominicanyorkness: A Metropolitan Discovery of the Triangle, by Sherezada (Chiqui) Vicioso
Where Are All the Others? by Erna Brodber
A Brief History of My Country, by Lourdes Vázquez

Part II: Creolization, Literature, and the Politics of Language
Writing and Creole Language Politics: Voice and Story, by Merle Collins
The Stakes of Créolité, by Ernest Pépin and Raphaël Confiant
Créolité without Creole Language? By Maryse Condé
The Victory of the Concubines and the Nannies, by Frank Martinus Arion
The Process of Creolization in Haiti and the Pitfalls of the Graphic Form, by Jean Métellus
Race, Space, and the Poetics of Moving, by M. Nourbese Philip

Kathleen M. Balutansky is associate professor of English at Saint Michael's College and author of The Novels of Alex La Guma and of several articles on Caribbean women writers. Marie-Agnes Sourieau is assistant professor of French at Fairfield University and author of articles on Francophone Caribbean literature in Callaloo, French Review, and elsewhere.

"Presents an essential, new chapter in the theory of creolization."