Items related to Chile in Transition: The Poetics and Politics of Memory 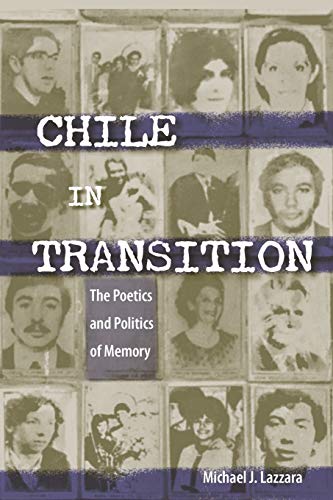 Chile in Transition: The Poetics and Politics of Memory

Title: Chile in Transition: The Poetics and ...

"A lucid and well-thought-out study of artistic expressions that evoke experiences from the years of the military dictatorship in Chile. . . . The perceptive analyses, intelligent insights, and breadth of information . . . make this [book] compelling reading."--Maria Ines Lagos, University of Virginia

Lazzara examines the political, ethical, and aesthetic implications of the diverse narrative forms Chilean artists have used to represent the memory of political violence under the Pinochet regime. By studying multiple "lenses of memory" through which truths about the past have been constructed, he seeks to expose the complex intersections among trauma, subjectivity, and literary genres, and to question the nature of trauma's "artistic" rendering.

Drawing on current theorizations about memory, human rights, and trauma, Lazzara analyzes a broad body of written, visual, and oral texts produced during Chile's democratic transition as representations of a set of poetics searching to connect politics and memory, achieve personal reconciliation, or depict the "unspeakable" personal and collective consequences of torture and disappearance. In so doing, he sets the "politics of consensus and reconciliation" against alternative narratives that offer an ethical counterpoint to "forgetting and looking toward the future" and argues that perhaps only those works that resist hasty narrative resolution to the past can stand up to the ethical and epistemological challenges facing postdictatorial societies still struggling to come to terms with their history.

Grounded in Lazzara's firsthand knowledge of the post-Pinochet period and its cultural production, Chile in Transition offers groundbreaking connections and perspectives that set this period in the context of other postauthoritarian societies dealing with contested memories and conflicting memorializing practices, most notably with Holocaust studies.

Michael J. Lazzara is associate professor of Latin American literature and culture at the University of California, Davis.