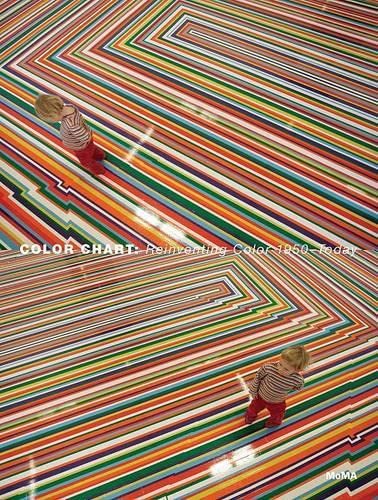 About new with no marks or DJ splits. Appears unused. Bookseller Inventory # SKU1007177

Color Chart addresses the impact of standardized, mass-produced color on the art of the past 60 years. Taking the commercial color chart as its central metaphor, this volume chronicles an important artistic shift that took place during the middle of the twentieth century: a frank acknowledgment of color as a matter-of-fact element rather than a vehicle of spiritual or emotional content. Collected here are more than 40 artists who explore in their works the double meaning of “ready-made color”--color bought off the shelf, rather than mixed on a palette, as well as color assigned by chance or arbitrary system rather than composed with traditional chromatic harmonies in mind.

Published to accompany a major exhibition at The Museum of Modern Art, New York, this volume begins with Marcel Duchamp’s Tu m’, the artist’s final painting, made in 1918, with its long array of color samples looming across the canvas. This early recognition of color’s commercial nature was fully explored more than three decades later by artists such as Robert Rauschenberg, Andy Warhol, Gerhard Richter and Alighiero Boetti, who in the 1950s to the 1970s, with a host of others, redefined the parameters of color from a matter of personal expression to one of arbitrary systems and random processes. The repercussions of this transformation continue to be felt into the twenty-first century, in work by artists including Sherrie Levine, Mike Kelley and Damien Hirst, as well as others who explore color in digital technology This volume traces the lineage of the questions provoked by color’s new status, and the variety of answers that have resulted.