Items related to THE DAWN OF CIVILIZATION. The First World Survey Of...

Home Piggott, Stuart (Edited By) THE DAWN OF CIVILIZATION. The First World Survey Of Human ... 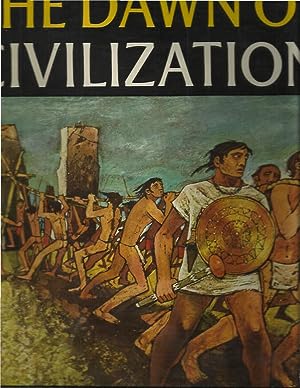 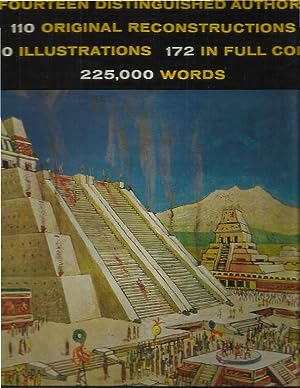 THE DAWN OF CIVILIZATION. The First World Survey Of Human Cultures In Early Times.

light blue~grey & gilt lettered cloth hardbound folio. very large & heavy ("coffee table" size book), international or priority shipping will cost extra. dustwrapper in protective plastic. fine cond. binding square & tight. covers clean. edges clean. contents free of all markings. very nice. almost new. dustwrapper in near fine cond. minor wrinkling & tears at spine bottom, bit of rubbing along spine edges, not price clipped. nice clean copy. no library markings, store stamps, stickers, bookplates, no names, inking , underlining, remainder markings etc ~ first edition. first printing (nap). ~ Please Note: book is larger than scanner so the photos are a bit cropped. decorative frontis. 404p. "Fourteen Distinguished Authors. 110 Original Reconstructions. 940 Illustrations, 172 In Full Color. 225,000 Words. 48 Maps And Chronological Charts. 645 Photographs And Drawings." archaeology. art history. ancient history. ancient religion. prehistory. anthropology. Texts By: GRAHAM CLARK ~Hunters and Gatherers of the Stone Age /JAMES MELLAART ~Beginning of Village and Urban Life /M. E. L. MALLOWAN ~Mesopotamia and Iran /CYRIL ALDRED ~The First Flowering in Ancient Egypt /WILLIAM CULICAN ~The Sea Peoples of the Levant /SETON LLOYD ~The Early Settlement of Anatolia /M.S.F. HOOD ~The Aegean Before the Greeks /SIR MORTIMER WHEELER~ Ancient India /WILLIAM WATSON~China :The Civilization of a Single People /ANTHONY CHRISTIE~The Diverse Traditions of South East Asia /E. D. PHILLIPS ~The Nomad Peoples of the Steppes /T. G. E. POWELL ~Barbarian Europe /G. H. S. BUSHNELL ~The Birth and Growth of New World Civilization/ Stuart Piggott~The Heritage Of Man. ~ THE DAWN OF CIVILIZATION is the product of more than three years of unremitting and dedicated work by fourteen of the world' s leading arcbaeologists. It is the most complete survey, in text and pictures, of the rise of civilized man in publishing history. With its hundreds of illustrations, maps, and charts~in color and in black and white~the volume is not only a marvel of book production but a standard work of the greatest international importance for laymen and specialists alike. Fourteen internationally known scholars, each an expert in his field, trace the history of man, from a half~animal in a hostile world to the lirerate human being he fought to become. The book tells the story of a procession of great men whose names will never be known, men of all races and countries in an awakening world~the Ancient Egyptians, the Sumerians, the people of the Indus and of China, the barbarians of the Steppes and Europe, the merchants, seamen, and warriors of the Mediterranean lands, and the macabre human flowering in the countries of Middle America. It is a story which extends over many thousands of years, a record of man as he emerged into the light of history, colored by his superstition and barbarity, his striving and pains, his gathering knowledge, and his triumph. The birth of civilization in each region of the world~and the vast eras of Stone Age man who came first~are described in turn by the distinguished authors. Each section, brilliantly and profusely illustrated, is integrated within the whole volume by Professor Stuart Piggott. In all, nearly a thousand color plates. reconstructions, plans, black and white illustrations, line drawings, maps and plans~the results of international research on the widest scale~bring the distant past vividly and authentically to life. Many of the photographs have been specially taken for this book, and many more appear in print for the first time. The full~color reconstructions alone occupied a team of artists for more than two vears, From the hunters, cannibals and gatherers of the first half~million years through the beginnings of village life, the birth of written history, the rise of the god~kings, the first merchant venturers, the Aegean heroes, ancient India and Cathay, and the nomad peoples of the Steppes, to the birth of the New World, The Daum 01 Civil. Bookseller Inventory # 1241202

Title: THE DAWN OF CIVILIZATION. The First World ...


ABEBOOKS processes ALL my credit card orders. I can also take Paypal. Pay direct
by check or money order.
Always, books are returnable with no questions asked, for any reason.


All books with dustwrappers are shipped with a Brodart protective book jacket cover unless otherwise noted.
Oversize (quarto, folio or really heavy) books, and sets often require a request for additional shipping if the order is a priority or international order.

address all inquiries to clfessler@sbcglobal.net