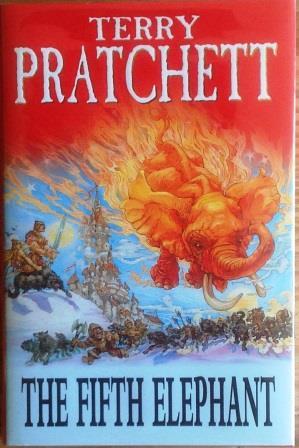 A lovely copy that doesn't look like it has been ever read. The binding is tight and there are no creases on the spine. The spine ends and the boards are in fine condition. The dust jacket is fine and is protected with removable clear film. The only sign of wear is the page edges which are slightly toned. (NOT tanned). A stunning collectible for any Pratchett fan. First edition, first printing.*************SHIPPED IN A BOX WITH PLENTY OF PROTECTION. Bookseller Inventory # 279269

Terry Pratchett has a seemingly endless capacity for generating inventively comic novels about the Discworld and its inhabitants, but there is in the hearts of most of his admirers a particular place for those novels that feature the hard-bitten captain of the Ankh-Morpork City Watch, Samuel Vimes. Sent as ambassador to the Northern principality of Uberwald where they mine gold, iron, and fat--but never silver--he is caught up in an uneasy truce between dwarfs, werewolves, and vampires in the theft of the Scone of Stone (a particularly important piece of dwarf bread) and in the old werewolf custom of giving humans a short start in the hunt and then cheating.

Pratchett is always at his best when the comedy is combined with a real sense of jeopardy that even favorite characters might be hurt if there was a good joke in it. As always, the most unlikely things crop up as the subjects of gags--Chekhov, grand opera, the Caine Mutiny--and as always there are remorselessly funny gags about the inevitability of story:

They say that the fifth elephant came screaming and trumpeting through the atmosphere of the young world all those years ago and landed hard enough to split continents and raise mountains.

No one actually saw it land, which raised the interesting philosophical question: when millions of tons of angry elephant come spinning through the sky, and there is no one to hear it, does it--philosophically speaking--make a noise?

As for the dwarfs, whose legend it is, and who mine a lot deeper than other people, they say that there is a grain of truth in it.

All this, the usual guest appearances, and Gaspode the Wonder Dog. --Roz Kaveney, Amazon.co.uk

We are passionate about collecting and selling books. For us it is a hobby as well as a business. We believe strongly in treating our customers as we would want to be treated. Therefore our emphasis is on good reliable customer service, respect and courtesy, accurate descriptions and careful packaging. We are always happy to answer any questions. If you are new to book collecting please do not hesitate to ask us anything. We specialize in limited,numbered editions, including slipcased & leatherbound books by authors such as: Miles Cameron, Nicholas Eames, R J Barker, Patrick Rothfuss, Brandon Sanderson, Scott Lynch and Philip Reeve.


Orders usually ship within 2 business days. Shipping costs are based on books weighing 2.2 LB, or 1 KG. If your book order is heavy or oversized, we may contact you to let you know extra shipping is required..