Items related to The Final Move Beyond Iraq: The Final Solution While...

Home Evans, Mike The Final Move Beyond Iraq: The Final Solution While the World ...
Stock Image 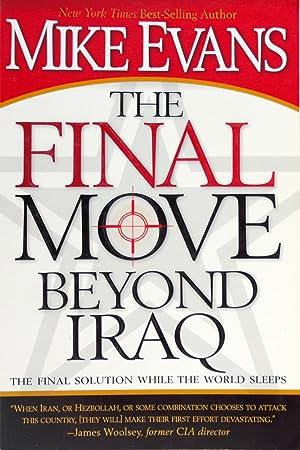 The Final Move Beyond Iraq: The Final Solution While the World Sleeps

Quantity: 1
View all  copies of this book
Buy Used
Price: US$ 5.21 Convert Currency
Shipping: US$ 4.20 Within U.S.A. Destination, rates & speeds
Add to basket

NEW YORK TIMES BEST SELLER!
From esteemed author and journalist of of over 70 books
In The Final Move Beyond Iraq, Mike Evans addresses the greatest threat America has faced since the Civil War: the Islamic revolution, or Islamofascism. While the United States debates the best way to solve the situation in Iraq, the terrorists are claiming victory and planning to take their show to American soil once again. Drawing from extensive interviews with prime ministers, CIA directors, and other insiders, Evans looks at the history and ideology behind the Islamic revolution to explore its very real threat to U.S. interests —why radical Islamic terrorists will only step back when they fear us, why victory in Iraq is important to U.S. security, why the United States and Israel cannot sit idly by and let Iran achieve its desire for nuclear weapons, and why stabilization in Iraq now would sound defeat rather than victory. The Final Move Beyond Iraq is a wake-up call to mobilize millions to action. America is fighting for its life in the first war of the twenty-first century.

Could we lose the war on terror?

America is fighting for its life in the first war of the twenty-first century. The battle is for the soul of America, and ground zero is Iraq.

While the United States debates, the terrorists are claiming victory and planning to take their show to American soil once again. In The Final Move Beyond Iraq, best-selling author Mike Evans gives us a wake up call, demonstrating conclusively that:

·An Islamic revolution is spreading and is on the brink of becoming America's greatest threat since the Civil War. ·Immediate withdrawal from Iraq would be disastrous and will embolden terrorists to attack America at home. ·Iran is playing a major role in the current violence. ·The U.S. must strike Iran within the next twelve months, or the next President may be presiding over a nuclear 9/11.

American soldiers are risking their lives for our freedom. We must see this war through to the end--or our next battle will be much, much worse.

Books have been one of the major loves of my life so to develop a home online bookshop when my children are all grown and with families that extend our whole family, seemed the natural thing for me to do. My BookShop has many, many selections of all kinds, with emphasis on history, literature, classical works, modern classic fiction,biography and unique books. Also look in my shop for children's books, books about the sciences, art, spirituality, religion--look for whatever you want! I love books and reading and I hope you do too. Your reading enjoyment is my goal.


We guarantee the condition of every book as it's described on the Abebooks web
sites. If you're dissatisfied with your purchase (Incorrect Book/Not as
Described/Damaged) or if the order hasn't arrived, you're eligible for a refund
within 30 days of the estimated delivery date. If you've changed your mind about
a book that you've ordered or have a question about it, please use the Ask
bookseller a question link to contact us and we'll respond within 2 business
days.
Registered Trade Name: THE PAR...