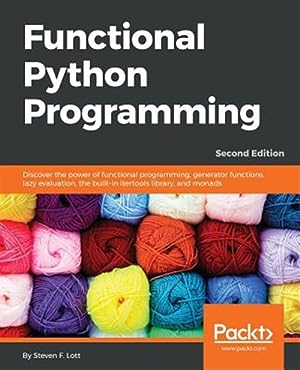 Quantity: 5
View all  copies of this book
Buy New
Price: US$ 55.11 Convert Currency
Shipping: US$ 2.64 Within U.S.A. Destination, rates & speeds
Add to basket

Create succinct and expressive implementations with functional programming in Python

If you're a Python developer who wants to discover how to take the power of functional programming (FP) and bring it into your own programs, then this book is essential for you, even if you know next to nothing about the paradigm.

Starting with a general overview of functional concepts, you'll explore common functional features such as first-class and higher-order functions, pure functions, and more. You'll see how these are accomplished in Python 3.6 to give you the core foundations you'll build upon. After that, you'll discover common functional optimizations for Python to help your apps reach even higher speeds.

You'll learn FP concepts such as lazy evaluation using Python's generator functions and expressions. Moving forward, you'll learn to design and implement decorators to create composite functions. You'll also explore data preparation techniques and data exploration in depth, and see how the Python standard library fits the functional programming model. Finally, to top off your journey into the world of functional Python, you'll at look at the PyMonad project and some larger examples to put everything into perspective.

What you will learn

Who This Book Is For

This book is for Python developers who would like to perform Functional programming with Python. Python Programming knowledge is assumed.

Steven F. Lott has been programming since the '70s, when computers were large, expensive, and rare. He's been using Python to solve business problems for over 10 years. His other titles with Packt Publishing include Python Essentials, Mastering Object-Oriented Python, Functional Python Programming, and Python for Secret Agents. Steven is currently a technomad who lives in city along the east coast of the U.S. You can follow his technology blog (slott-softwarearchitect).