Items related to Gender and Language in Chaucer 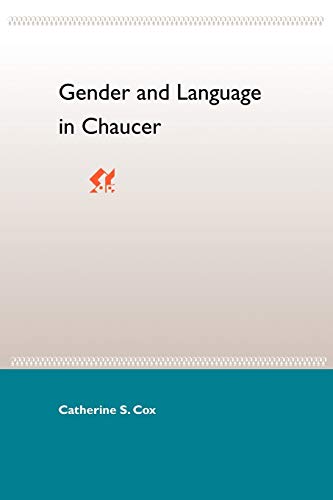 Gender and Language in Chaucer

Title: Gender and Language in Chaucer

"Builds expertly and significantly on several earlier feminist analyses of Chaucer’s works. . . . An important addition to the growing body of work devoted to Chaucer and gender. . . . One of the real strengths of this work is the way in which it ties medieval notions of gender both to ancient, Aristotelian views and to modern and postmodern feminist theories."--Laura Howes, University of Tennessee, Knoxville

Catherine S. Cox considers the significance of gender in relation to language and poetics in Chaucer’s writing. Examining selections from The Canterbury Tales, Troilus and Criseyde, The Legend of Good Women, and the ballades, she explores Chaucer’s concern with gender and language both within the context of fourteenth-century culture and in light of contemporary feminist and poststructuralist theory.

Cox argues that Chaucer’s attention to gender and language exposes the contradictory notions of woman in medieval culture. Further, resisting the imposition of modern, reductive theoretical concerns on medieval authors, Cox makes a compelling case for a Chaucer who both confirms and challenges the orthodoxy of his day, thereby countering recent arguments that insist upon a wholly feminist or wholly patriarchal Chaucer.

Informed by a broad range of traditional literary and historical scholarship (including Aristotelian philosophy, medieval Latin culture, and the writings of the Church fathers) as well as by recent psychoanalytical debates related to postmodern feminist critical theory (including those of Luce Irigaray, Julia Kristeva, and feminist film theorists), Cox’s study demonstrates the significant interplay among ancient, medieval, and modern issues of scholarship and learning.

Catherine S. Cox is assistant professor of English at the University of Pittsburgh, Johnstown, and the author of articles on Dante, Henryson, and other medieval writers.