Items related to Guns, Germs, and Steel: The Fates of Human Societies 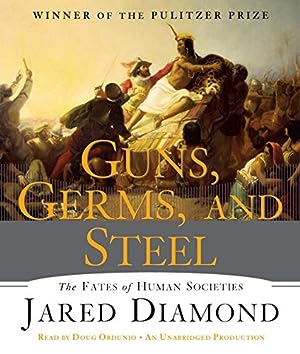 Guns, Germs, and Steel: The Fates of Human Societies

Why did Eurasians conquer, displace, or decimate Native Americans, Australians, and Africans, instead of the reverse? Evolutionary biologist Jared Diamond stunningly dismantles racially based theories of human history by revealing the environmental factors actually responsible for history’s broadest patterns.

The story begins 13,000 years ago, when Stone Age hunter-gatherers constituted the entire human population. Around that time, the paths of development of human societies on different continents began to diverge greatly. Early domestication of wild plants and animals in the Fertile Crescent, China, Mesoamerica, the Andes, and other areas gave peoples of those regions a head start. Only societies that advanced beyond the hunter-gatherer stage acquired a potential for developing writing, technology, government, and organized religions—as well as those nasty germs and potent weapons of war. It was those societies, that expanded to new homelands at the expense of other peoples. The most familiar examples involve the conquest of non-European peoples by Europeans in the last 500 years, beginning with voyages in search of precious metals and spices, and often leading to invasion of native lands and decimation of native inhabitants.

Explaining what William McNeill called The Rise of the West has become the central problem in the study of global history. In Guns, Germs, and Steel Jared Diamond presents the biologist's answer: geography, demography, and ecological happenstance. Diamond evenhandedly reviews human history on every continent since the Ice Age at a rate that emphasizes only the broadest movements of peoples and ideas. Yet his survey is binocular: one eye has the rather distant vision of the evolutionary biologist, while the other eye--and his heart--belongs to the people of New Guinea, where he has done field work for more than 30 years.