Items related to Held Captive : The Kidnapping and Rescue of Elizabeth... 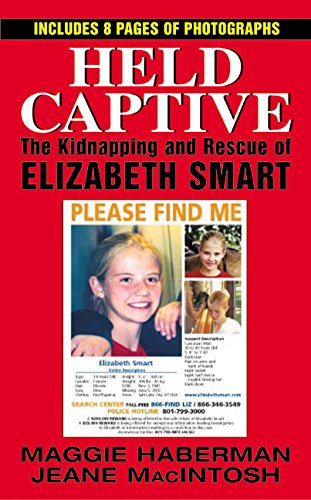 Held Captive : The Kidnapping and Rescue of Elizabeth Smart

Used book that is in clean, average condition without any missing pages. Seller Inventory # 223690-6

Title: Held Captive : The Kidnapping and Rescue of ...

The Kidnapping and Rescue of Elizabeth Smart

In the dead of night in June, 2002, 14–year old Elizabeth Smart was kidnapped at knifepoint from her devoutly Mormon household. Nine months later, she was discovered with her two abductors just miles from her home––and returned to her family as a dramatically different person. Her innocence was stolen and her identity stripped over months in the gnarled mountains overlooking her family home, by captors who wrapped themselves in a religion of their own invention and said they were serving a revelation from God. The angelic teenager's homecoming on March 12 captured headlines and magazine covers around the globe, the rare piece of good news in America's era of terror and uncertainty. Yet the joyous story turned shocking just days later, as the disturbing details of her emotional and physical torture at the hands of her captors, serial paedophile Brian David Mitchell and his wife, Wanda Barzee, began to emerge. This book–the first book on the dramatic kidnapping–is the story of two worlds colliding; the girl in the bubble, and the man from the wild.

Haberman is a staff reporter for the New York Daily News, for whom she covered the Smart case. She began her career as a New York Post reporter, where she covered local politics and many national stories, from the arrest of Dr. Jack Kevorkian to the school shooting in Jonesboro, Arkansas.