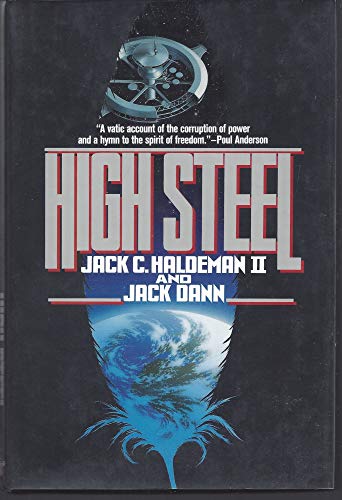 Synopsis: Native American John Stranger leaves his reservation to work on a space construction project, still trying to preserve his people's traditions and, while becoming a hero to workers and a threat to the corporation, confronts thunder-beings who invade dreams

From Kirkus Reviews: Grab-bag of a yarn involving Native Americans, aliens, artificial intelligence, and covert corporate warfare, from Haldeman (Vector Analysis, 1978) and Dann (The Man Who Melted, 1984; More Wandering Stars, 1981, etc.). In the medium future, two corporations, Trans-United and Macro, now dominate the Earth and--somehow--have enslaved America's native peoples, forcing them to go into space as construction workers, or to disappear as Sleepers in illegal hibernation trials. John Stranger, on the verge of becoming a medicine man, is taken into space, where--thanks to his astonishing intuitive ability to make correct decisions--saves a Trans-United station from an attack by Macro. Back on Earth, meanwhile, Stranger's mentor, Leonard Broken-finger, has contacted some aliens via the spirit world; the same aliens have beamed a coded message to Earth carrying a secret of a faster-than-light space drive. Unknowingly, Stranger has helped build a ship with such a drive; it's commanded by Einstein, a computer-intelligence genius. Macro, by plotting, assassination, and subversion, seize Einstein--or so they think--with Stranger still on board. Hereafter, matters become steadily less intelligible and coherent. The mysterious aliens never show up. Lots of people die in untimely fashion. Dazzling ideas caught up in a hopelessly confused swirl of a plot--along with a curious backdrop that here gleams with polish, there crumbles at a touch. Many impressive and tantalizing parts, but no satisfying whole. -- Copyright ©1993, Kirkus Associates, LP. All rights reserved.

Book Description Doherty Associates, LLC, Tom. Hardcover. Condition: Good. A copy that has been read, but remains in clean condition. All pages are intact, and the cover is intact. The spine may show signs of wear. Pages can include limited notes and highlighting, and the copy can include previous owner inscriptions. At ThriftBooks, our motto is: Read More, Spend Less. Seller Inventory # G0312931638I3N00

Book Description Doherty Associates, LLC, Tom. Hardcover. Condition: As New. An apparently unread copy in perfect condition. Dust cover is intact; pages are clean and are not marred by notes or folds of any kind. At ThriftBooks, our motto is: Read More, Spend Less. Seller Inventory # G0312931638I2N00

Book Description Tor Books, 1993. Hardcover. Condition: Good. Connecting readers with great books since 1972. Used books may not include companion materials, some shelf wear, may contain highlighting/notes, may not include cdrom or access codes. Customer service is our top priority!. Seller Inventory # S_266277092

Book Description Tor Books, 1993. Hardcover. Condition: Good. Connecting readers with great books since 1972. Used books may not include companion materials, some shelf wear, may contain highlighting/notes, may not include cdrom or access codes. Customer service is our top priority!. Seller Inventory # S_282924683

Book Description Tor Books, 1993. Condition: Good. A+ Customer service! Satisfaction Guaranteed! Book is in Used-Good condition. Pages and cover are clean and intact. Used items may not include supplementary materials such as CDs or access codes. May show signs of minor shelf wear and contain limited notes and highlighting. Seller Inventory # 0312931638-2-4