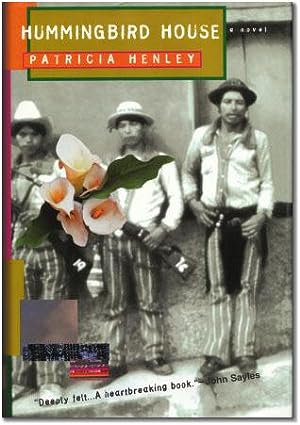 When Kate Banner, an American midwife in Nicaragua, loses another patient - a young woman who had recently given birth - she decides it is time to go home, because to care for the children of war you have to cut off pieces of your heart. Her travels home lead her to Guatemala where she again encounters the innocent victims of a country's war. Hummingbird House is a devastatingly powerful and emotionally trustworthy story of a human heart unbinding itself in the most unjust of worlds.

Kate Banner, an American midwife, heads to Mexico for a three-week visit in the mid-1980s and ends up staying south of the border for eight years. From Mexico she travels first to Nicaragua and then to Guatemala, two nations torn by revolution and sunk in horrific poverty and violence. Along the way, she delivers babies, administers what first aid she can, and becomes involved with a group of activists, most of them from North America. The novel opens in the midst of a hurricane, during which a young pregnant woman goes into labor in a rowboat. Kate successfully delivers the child, but the mother dies soon afterwards. It is this event that starts the wandering midwife thinking about going home at last. When a longtime love affair with an American arms supplier to the Sandinistas goes south, Kate heads to Guatemala where friends have a house for a little rest and some thinking time. All thoughts of Indiana are banished, however, when she meets her fellow lodger, Father Dixie Ryan, a priest who is struggling with his vocation. The two become lovers and decide to open Hummingbird House, a clinic and school for Guatemalan children. Unfortunately, even the best intentions can go disastrously awry, and Kate must experience terrible loss before she can find eventual salvation.

Patricia Henley spent many months traveling the roads her fictional heroine treads, gathering firsthand accounts from refugees, activists, and indigenous people. Though her novel never feels researched, every page bristles with quiet indignation at the political and military atrocities visited upon the innocent. "The maps do not tell you that the forests of Belize and Honduras were cut down to rebuild London after the Great Fires of 1666," Kate muses, sitting in her kitchen in the Guatemalan highlands.

They do not show you the scars of Nicaraguan children who lost their arms and legs when their school bus struck a Contra mine buried in the road. Nor do the maps delineate the precise number of Mayan cornfields soaked in gasoline and set afire by Guatemalan government soldiers. And they cannot tell you the exact words of the sermon given by Oscar Arnulfo Romero, the archbishop of San Salvador, before his murder at his own altar.

Political novels run the risk of becoming polemical; Henley largely avoids this pitfall by concentrating on her characters' personal lives within the context of the extreme circumstances in which they find themselves. Some of her stylistic choices can prove, at times, confusing, such as her liberal use of flashback to flesh out her characters' pasts, and the occasional switch in voice from third person to first. Still, her dark tale is compelling enough to overcome such minor defects, and Hummingbird House, in the end, is an impressive first novel. --Margaret Prior

Business is conducted via internet, mail order and book fairs.


Terms: Check, Money Order, or Cashiers Check with order unless credit has been established. Credit
cards are accepted through PayPal and the ABE site. Books may be reserved by telephone (425-351-6959) or email (orpheusbooks@frontier.com) and will be held for 1 week pending payment in full. Note:
When we state First Edition we are speaking of a First Printing. We strongly recommend that you call or email to reserve books prior to sending payment via mail. Please telephone between the hours of 10 ...