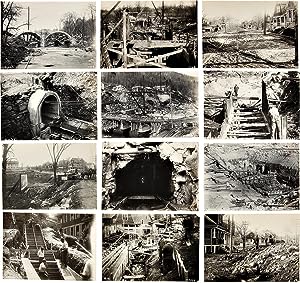 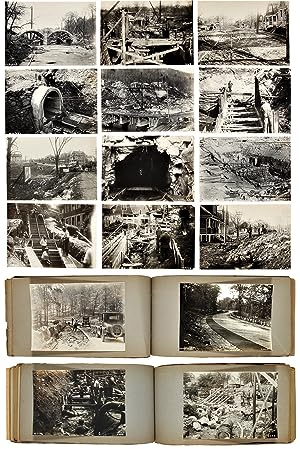 Approximately 1,550 sepia-toned or black-and- white photographs, most between 2 x 4 inches and 4 x 6 inches (a handful slightly smaller, some slightly larger), a handful of panoramas, and about ten examples 8 x 10 inches. One cloth photograph album, two paperbound photo albums, numerous loose album pages, and the remainder of approximately 950 photographs loose. Some slightly faded, minor edge wear, a handful unevenly trimmed, almost all of the loose photos previously mounted, with adhesive and paper remnants on verso. A handsome and engaging assemblage. An amazing collection of vernacular photography, most detailing public works projects in Connecticut from the late 1920s through the 1940s. The earliest of the photos are housed in the cloth photo album and date from 1892 to 1894, showing the construction of the Washington Avenue bridge and sewer system in Waterbury, Connecticut and the construction of the Bethany Dam. In fact, the lion's share of the photos in the present archive come from Waterbury, Bethany, or other towns in New Haven and Litchfield counties. The majority of the images in the album focus on the Bethany Dam project, with additional shots of houses and other buildings presumably near the site, perhaps structures now lost in the wake of the dam's construction. Other photos show construction of a pipeline and a small pedestrian bridge. The next important series of photos, several hundred of them in fact, focus on the construction of the Shepaug Dam, which the city of Waterbury completed in 1933 to divert water from the Shepaug River to Waterbury city reservoirs. Over a third of the total number of photographs in the archive concern either the Shepaug or Bantam rivers, most with manuscript captions on the verso. Most of these photos show the construction of the dam, the Shepaug River Bridge, or the Bantam River or Morris, Connecticut siphon tunnels. These photos date from about 1919 to the mid- 1930s, concentrated mostly around the late '20s and early '30s, when most of the construction was accomplished. There are also numerous photos of the power station and other related buildings around the construction site. The majority of the remainder of the archive shows road, bridge, and waterway construction from all around the Waterbury area, including a great many photos showing downtown Waterbury, and with numerous images of the construction or paving of roads such as Watertown Avenue, Alder Street, Baldwin Street, or Lovers Lane near the Mad River Bridge, as well as the Shepaug River Bridge, Bank Street Bridge, Turkey Hill Bridge, Sheffield Street Bridge, and the Silver Street Bridge over the Mad River. There is a striking juxtaposition of two photos in one of the paperbound albums, showing the South Main Street Bridge as it was in 1929 and as it was renewed in 1940, both shots taken from practically the same vantage point. The snapshots highlight the difference in bridge construction styles, the older showing the traditional trestle system common in the 19th century and then the sleeker, modern box girder style. There are a couple dozen images marking the period between the two bridges, showing the dismantling of the old and the rising of the new. The other paperbound album spotlights Chase Park, the Chase Parkway, and a bridge built over Sled Haul Brook. The images date from 1927 to 1938 and reveal a landscape transformed from a rural park area to a modern parkway, complete with a brand new bridge. This series of about 100 photographs is particularly interesting for its depiction of the march of progress through a particularly scenic rural Connecticut area. Another series of over seventy photographs shows the construction of a pipeline along Great Brook in Waterbury from 1919 to 1935. The photographs follow Great Brook at the Naugatuck River from South Main Street, along Elm Street, Meadow Street, and Brook Street to North Main Street. This selection of photographs, more than any other in the archive, shows peopl. Seller Inventory # WRCAM49307