Items related to The Meaning of Democracy and the Vulnerabilities of...

Home Ostrom, Vincent The Meaning of Democracy and the Vulnerabilities of Democracies:...
Stock Image 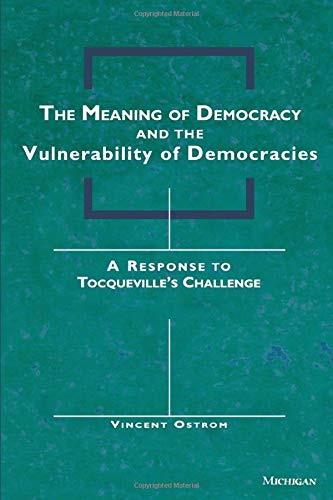 The Meaning of Democracy and the Vulnerabilities of Democracies: A Response to Tocqueville's Challenge

Title: The Meaning of Democracy and the ...

We struggle in the modern age to preserve individual freedoms and social self-government in the face of large and powerful governments that lay claim to the symbols and language of democracy, according to Vincent Ostrom.

Arguing that democratic systems are characterized by self-governing--not state- governed--societies, Ostrom contends that the nature and strength of individual relationships and self-organizing behavior are critical to the creation and survival of a democratic political system. Ostrom begins with a basic contradiction identified by Alexis de Tocqueville. De Tocqueville suggested that if citizens acted on the basis of their natural inclinations they would expect government to provide for them and take care of their needs. Yet these conditions contradict what it means to be self-governing. Ostrom explores the social and cultural context necessary for a democratic system to flourish emphasizing the important role of ideas and the use of language in defining and understanding political life. Discussing differences in the ideas about social organization among various cultural and intellectual traditions, he considers the difficulties encountered over time in building democratic societies in America, Asia, Europe, and Africa. He outlines lessons from these experiences for the efforts to build democracy in the developing world and the countries emerging from communism.

Based on a lifetime of thinking about the social conditions necessary to support a democracy, this book makes a significant contribution to the recent discussion about civil society and the fragility of our formal and informal social institutions and will be of interest to social scientists, historians and all readers concerned with the state of democracy in the modern world.

Vincent Ostrom is Arthur F. Bentley Professor of Political Science Emeritus and Co-Director of the Workshop on Political Theory and Policy Analysis, Indiana University. He is the author of many works on political theory and public administration.

Vincent Ostrom is Arthur F. Bentley Professor of Political Science Emeritus and Co-Director of the Workshop on Political Theory and Policy Analysis at Indiana University.