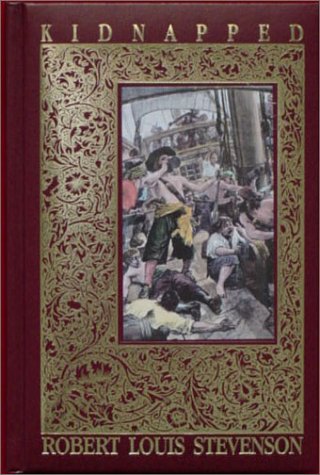 Synopsis: Uniquely designed, this 6 X 9 deluxe edition of Signature Classics features a padded leatherette casing enhanced by gold guilding on all three sides. Highlighted by a full color picture insert on the cover surrounded by gold foil stamping, this series is sure to becomea collectable. A standard Jacketed Edition is also available.

From the Publisher: Robert Louis Stevenson always considered "Kidnapped," the tale of 17-year-old David Balfour's adventures in the remote islands and highlands of Scotland with renegade soldier Alan Breck Stewart, to be his greatest novel, but when the classic adventure tale was published in 1886, it was missing much of what its author held dear. His English publisher had excised many of the Scottish words and phrases he had used to evoke the suspense of the novel. From simple misreadings to deliberate revisions, subsequent printed editions represented major departures from Stevenson's handwritten text. Now Barry Menikoff has restored the author's language and punctuation, as well as the authentic Scots quality of his diction. In doing so, he has given readers a clearer picture of both Stevenson's skill as a storyteller and the novel's social and political context.

Book Description Trident Reference Publishing, 2000. Condition: Good. A+ Customer service! Satisfaction Guaranteed! Book is in Used-Good condition. Pages and cover are clean and intact. Used items may not include supplementary materials such as CDs or access codes. May show signs of minor shelf wear and contain limited notes and highlighting. Seller Inventory # 1582790876-2-4

Book Description Trident Press International, 2000. Imitiation Leather. Condition: Near Fine. Deluxe. This beautiful book has a map and many black and white illustrations. It has a decorative leatherette binding with a gild decoration on the cover and gild lettering on the spine. All three edges are gilt and there is slight edge wear, mildly bumped corners and top and bottom of the spine, and a puncture on the front cover and a small tear in the back cover binding. Seller Inventory # 001217