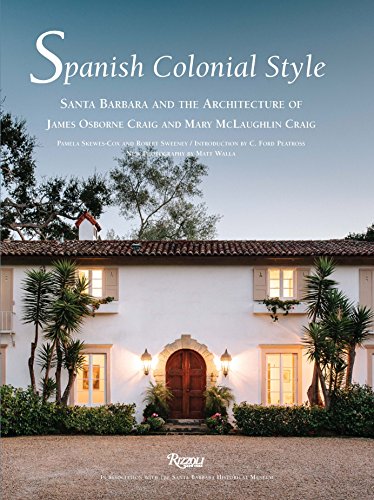 An ode to the classic Spanish-style houses of Santa Barbara. Spanish Colonial Style celebrates an extraordinary tradition in architecture whose hallmarks include whitewashed stucco and plaster walls, wood-beamed ceilings, dramatic fireplaces, and, above all, mystery and romance. Homes in this much-loved style of architecture welcome the visitor and embrace the resident, and architects James Osborne Craig and Mary McLaughlin Craig, early proponents of the style and influential disseminators of it, were masters of the form. Their work, until now, has been largely underappreciated and little seen.
The Craigs played pivotal roles in the development of the Spanish Colonial Revival and of other styles of architecture in Santa Barbara, and the influence of their work spread much beyond that. In addition to shining a long overdue spotlight on the rich career of these tremendously influential architects, Spanish Colonial Style also heralds Santa Barbara as the small city of international importance that it became in the first half of the twentieth century.

Pamela Skewes-Cox is an artist and writer based in Massachusetts. Robert Sweeney is the author of Casa del Herrero: The Romance of Spanish Colonial. C. Ford Peatross is founding director of the Center for Architecture, Design, and Engineering at the Library of Congress. Matt Walla is the photographer of Casa del Herrero.


We guarantee the condition of every book as it's described on the Abebooks web sites. If you're dissatisfied with your purchase (Incorrect Book/Not as Described/Damaged) or if the order hasn't arrived, you're eligible for a refund within 30 days of the estimated delivery date. If you've changed your mind about a book that you've ordered, please use the Ask bookseller a question link to contact us and we'll respond within 2 business days. M and N Media Attn: Logan Jones PO Box 801134 Acworth, GA ...