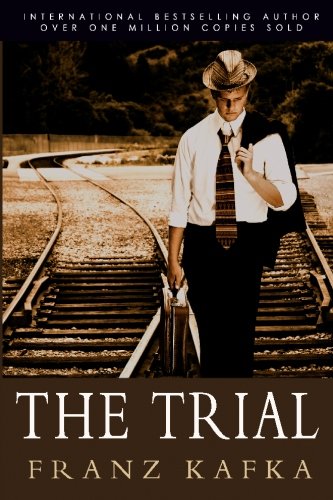 Synopsis: One of Kafka's best known works, The Trial tells the story of a man arrested a prosecuted by authorities he cannot challenge for crimes he does not understand. The philosophical parable within the story reveals the unique roles to which we are each assigned, voluntarily or involuntarily, and the depths to which we must delve to achieve self-realization. As both a commentary on the over-bureaucratic systems of society and an exploration of the personal and spiritual needs of humanity, The Trial is as relevant today as it was a century ago.

Review: A terrifying psychological trip into the life of one Joseph K., an ordinary man who wakes up one day to find himself accused of a crime he did not commit, a crime whose nature is never revealed to him. Once arrested, he is released, but must report to court on a regular basis--an event that proves maddening, as nothing is ever resolved. As he grows more uncertain of his fate, his personal life--including work at a bank and his relations with his landlady and a young woman who lives next door--becomes increasingly unpredictable. As K. tries to gain control, he succeeds only in accelerating his own excruciating downward spiral.

Book Description CreateSpace Independent Publishing Platform. Condition: Acceptable. Paperback The item is fairly worn but still readable. Signs of wear include aesthetic issues such as scratches, worn covers, damaged binding. The item may have identifying markings on it or show other signs of previous use. May have page creases, creased spine, bent cover or markings inside. Packed with care, shipped promptly. Seller Inventory # Q-06-2203

Book Description CreateSpace Independent Publishi, 2010. Paperback. Condition: Good. Connecting readers with great books since 1972. Used books may not include companion materials, some shelf wear, may contain highlighting/notes, may not include cdrom or access codes. Customer service is our top priority!. Seller Inventory # S_280808912

Book Description CreateSpace Independent Publishi, 2010. Paperback. Condition: Good. Good solid copy, mild to moderate reading/age wear, no DJ if issued, may have some light markings or exowner inscription. We take great pride in accurately describing the condition of our books and media, ship within 48 hours, and offer a 100% money back guarantee. Seller Inventory # mon0000201241