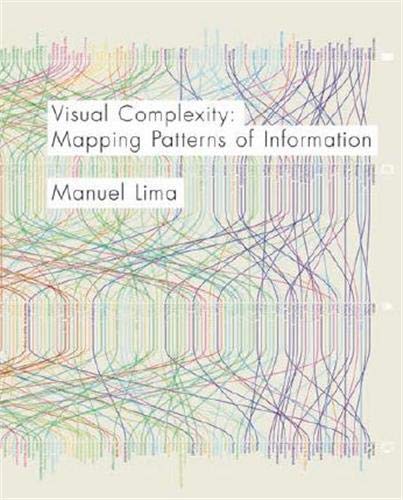 AbeBooks Seller Since May 19, 2021 Seller Rating

Quantity: 1
View all  copies of this book
Buy New
Price: US$ 56.70 Convert Currency
Shipping: US$ 3.95 Within U.S.A. Destination, rates & speeds
Add to basket

Synopsis:
Our ability to generate information now far exceeds our capacity to understand it. Finding patterns and making meaningful connections inside complex data networks has emerged as one of the biggest challenges of the twenty-first century. In recent years, designers, researchers, and scientists have begun employing an innovative mix of colors, symbols, graphics, algorithms, and interactivity to clarify, and often beautify, the clutter. From representing networks of friends on Facebook to depicting interactions among proteins in a human cell, Visual Complexity presents one hundred of the most interesting examples of information-visualization by the field's leading practitioners.
About the Author:
Manuel Lima is the founder of VisualComplexity.com and a Senior UX Design Lead at Microsoft. He is a Fellow of the Royal Society of Arts and was nominated by Creativity magazine as "one of the 50 most creative and influential minds of 2009".

Manuel Lima is a leading voice on information visualization and a frequent speaker in conferences and schools around the world, including TED, Lift, OFFF, Reboot, VizThink, IxDA Interaction, Royal College of Art, NYU Tisch School of the Arts, ENSAD Paris, University of Amsterdam, MediaLab Prado Madrid.

Sharing our love of books from our home to yours.


I will accept all returns within 30 days of delivery.

Orders can be canceled any time prior to the order being shipped.


I will ship through the Post Office within 48 hours of recieving your order.