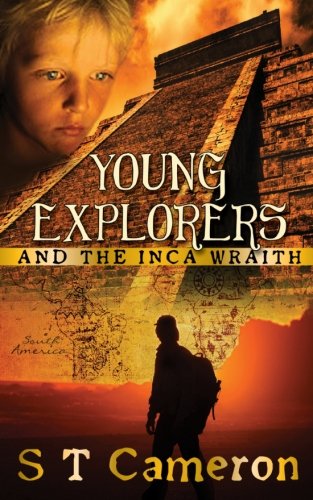 Synopsis: Eleven-year-old CJ Kask and his Young Explorer friends accompany their parents on an adventure to Peru when they are sent to discover why an archaeological expedition has stopped sending reports on their dig at an Inca temple. The Young Explorers discover that they must find the key to a mystery involving an Inca pyramid and the shadowy Wraith that is guarding it. Only then will they be able to save not only the original expedition but their parents as well.

About the Author: I tell stories and have adventures. When I was a little boy, I would tell stories and have adventures in the backyard pretending I was in a circus in front of an audience of my family and neighbors. In elementary school, more stories and adventures were played out on the stage in front of my class and, sometimes, the entire school. In High School and College, I donned my glasses and disguised my super writer self in my computer nerd persona and while I still told stories and had adventures, they were never made publicly known. Many years later, I decided that it was time to remove my disguise and let my stories out in the world again. My first adventure, Grimm End, was published in 2012 with four more Grimm End novels planned for 2013 through 2015. CJ Kask, the 106 year old explorer from Grimm End, also appears as an eleven-year-old adventurer in Young Explorers and the Inca Wraith, the first book of the Young Explorers series which was published in 2013. In addition, a sprawling swords and sorcery fantasy novel series and a number of computer thrillers will appear over the next several years. Outside of writing, I have adventures with Kay, my wife and future author of her own books, my two wonderful daughters and their families including three grand-children (and one on the way) and two grand-puppies. I also let people know what is going on with my writing at stcameron.com.