Imagine writing a 50,000-word novel without using the letter 'e'. That might seem a rather pointless challenge but you can read just such a book - Gadsby by Ernest Vincent Wright, a self-published story from 1939.

Gadsby's text is a lipogram - a form of writing where a letter, or even a number of letters if you are so inclined, are omitted. Apparently, 'e' is the most common letter to cast aside for such challenges and that means the author cannot use words such as 'the', 'he', 'she', 'have', and 'they'.

Gadsby tells the story of a fictional city called Branton Hills, which is revitalized as a result of the efforts of its new mayor, John Gadsby, and a group of young people.

This book is the gold standard for lipograms - not for the plot or narrative but the author's sheer wondrous achievement. Wright could not even apply 'ed' to past tense verbs. 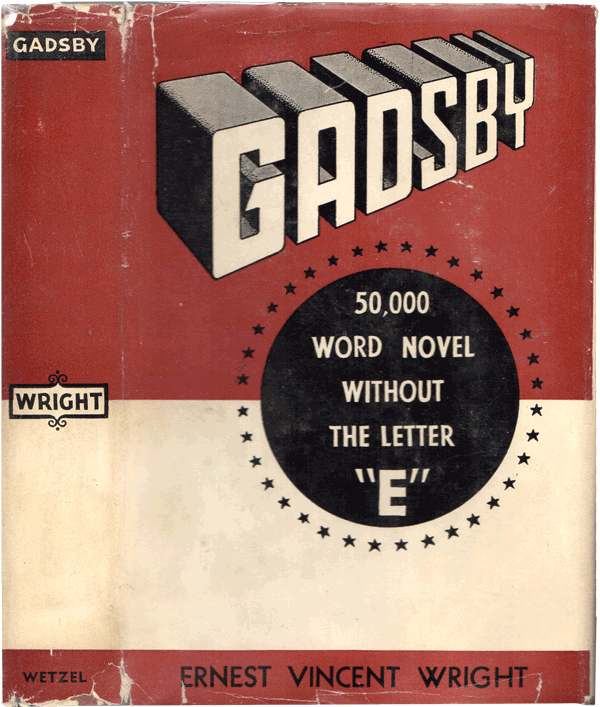 The novel comes with an introduction, including words with the letter 'e', where Wright, whose name includes three e's, explains how he took on this linguistic challenge. Once the story begins for real, there isn't an 'e' to be seen.

"The entire manuscript was written with the E-type bar of the typewriter tied down; thus making it impossible for that letter to be printed. This was done so that none of that vowel might slip in, accidentally; and many did try to do so!"

He reveals the book took five and a half months to write and was newsworthy even before he had finished, with the Associated Press running a story about him.

"I received one most scathing epistle from a lady, denouncing me as a 'genuine fake,' and ending by saying 'Everyone knows that such a feat is impossible.'"

Wright did not use abbreviations, such as Mr., where the full word contains the letter 'e'. He avoided using numerals written as words so there are no numbers between six and thirty. Wright admits the story overuses the word 'said' as 'replied' and 'asked' could not be used. 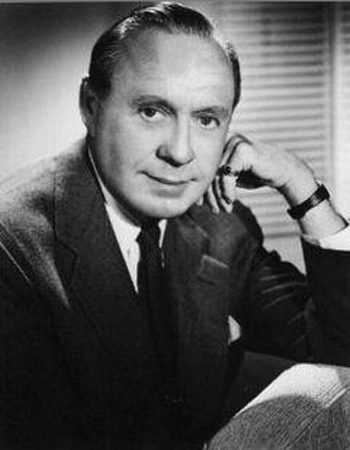 "Pronouns also caused trouble; for such words as he, she, they, them, theirs, her, herself, myself, himself, yourself, etc., could not be utilized."

My job at AbeBooks has introduced to me to many self-published books. On the whole, they are appalling and completely live up the old-fashioned label of vanity publishing. Full of spelling and grammatical errors, these books are usually of interest to one person, the author.

I'm happy to make an exception for Gadsby as the concept is so amazing. It is awkward to read. The narrative doesn't flow and it feels like Wright swallowed a dictionary, which he probably did. The characters' speech is stilted. The plot concerns civic improvements, like creating a zoo, and these are not the most thrilling of literary devices.

Branton Hills' philanthrophy was now showing signs of monotony; so our Organization had to work its linguistic ability and captivating tricks full blast, until that thousand dollars had so grown that a library was built on a vacant lot which had grown nothing but grass...

Appreciate Wright's remarkable ability to select words that work within these strict confines and his ability to manipulate sentences into something coherent. This is a task that would flummox many famous authors.

Gadsby fits in the oddball publishing genre but the scarce first editions have become valuable. Prices on AbeBooks.com vary from $700 to $9,500 for a copy complete with a dust jacket. Wright tried to find a publisher but they all turned him down and we can imagine their disdain upon receiving the manuscript. So he self-published the work but the story does not end there - a warehouse fire destroyed many copies, which increased the value of those original copies. Sadly, Wright died shortly after the book was published. 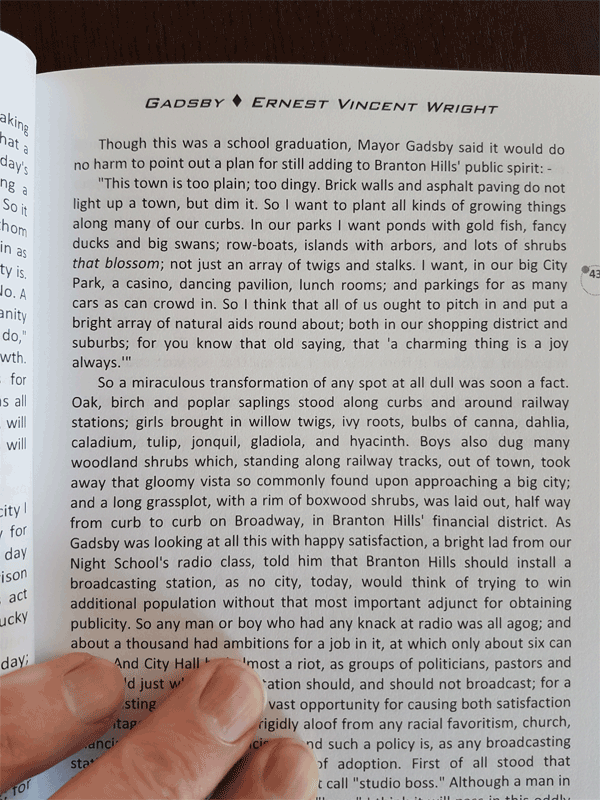 "It's rare, even without the jacket," explained bookseller Rob Rulon Miller. "I've only seen two copies in 40 years in the jacket and I bought them both. It's part of a long tradition of lipogrammatic works which goes back to the 17th century, I think. Also, it's an utterly oddball book - who would have thought it could even be done?"

The book's copyright lapsed in 1969 and it can now be purchased as a print on demand book.

Wright's legacy firmly resides on the unhinged side of publishing but what an interesting example of someone on an oddball mission. He wasn't alone, the word lipogram originated in ancient Greece and puzzle fans still enjoy the challenge of producing text or speech that lacks a particular letter.

French experimental author Georges Perec wrote a novel in 1969 called La Disparition, which lacked the letter e, and that's not easy in French. There is an English translation called A Void - and hat's off to the translator, Gilbert Adair, who also managed to omit the letter 'e'.

American humorist James Thurber wrote a children's book in 1957 called The Wonderful O where the letter 'O' is banned from use. Lipogram challenges have also featured in TV series, How I Met Your Mother and Gilmore Girls.

Apparently Wright wrote three other books - The Wonderful Fairies of the Sun (1896), The Fairies That Run the World and How They Do It (1903), and Thoughts and Reveries of an American Bluejacket (1918). They have faded into obscurity while Gadsby lives on... in peculiarity.

If you found this article interesting, then read my lipogram version where I did not use the letter 'e' and discovered just how difficult this type of writing is.


What do you think? But don't use an 'e' in your comment.

The Voynich Manuscript - Decode the World's Most Mysterious Book