The Alcoholics Anonymous Big Book is not just the most influential self help book ever published. It's one of the 20th century's most significant books and early copies are treasured by numerous collectors.

Nicknamed the Big Book by the early AA members for its thick paper and wide margins, the book's history began in 1934 when Bill Wilson, an alcoholic stockbroker who had found sobriety, decided to help other drunks in New York.

On a visit to Akron, Ohio, he met Dr. Bob Smith, another alcoholic who was still struggling with addiction to drink. Smith too found sobriety and two men began visiting hospitals to find more drinkers in need of assistance. The first help groups were created in Akron and New York, and Wilson's formula - no last names, therapeutic sessions where alcoholics recount their experiences - started to take shape.

The 30 Best Self Help Books Explore

Wilson was ambitious but struggled to find funding for his plans. His methods simply did not sound convincing. In 1938, he began writing down his strategy for sobriety in a manuscript intended for publication eventually. The book opens with Wilson's own descent into alcoholism and his subsequent recovery. The chapters, as he finished them, would be read aloud at AA meetings, Smith would review the copy and a man called Hank Pankhurst, a former oil executive, attempted to drum up funding.

The middle section of the book details the famous 12 steps. Wilson, Smith and other early members had many debates about the direction that the book should take, including how it should address religion and spirituality. Wilson did most of the writing, but Pankhurst wrote the "To the Employer" chapter. 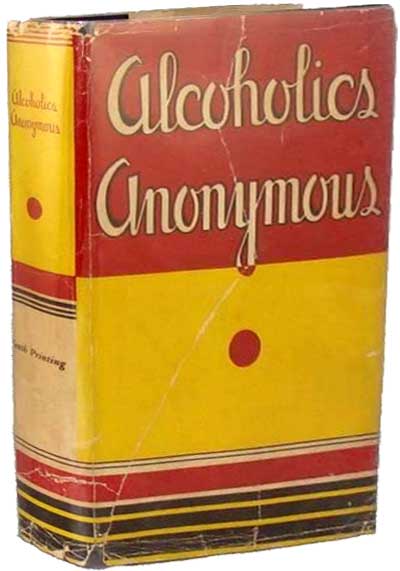 Cornwall Press was contracted to print the book in 1939. However, the fledgling AA organization had no funds to pay for the print run itself so the publisher kept the copies and released them on a 'pay as you go' basis.

It took almost two years to sell the 4,650 copies of the first printing. The bank foreclosed on Wilson's house in Brooklyn. In 1941, things changed for the better when the Saturday Evening Post carried a positive article about the book and AA started receiving inquiries about it.

A second printing was issued with some changes. There were 16 printings in all between 1939 and 1954. The seventh edition from 1945 is the rarest (estimates say 500 to 1,500 copies were issued) but no-one knows why it is so scarce. It may have been intended for overseas military personnel and the copies were lost somewhere or there was a short print run due to post-wartime paper shortages. The eighth printing featured 20,000 copies.

As we all know, AA grew and developed across the world. Today, Alcoholics Anonymous has millions of members. Wilson died sober in 1971. Smith died in 1950, also sober. Pankhurst started drinking again after the Big Book was published and died in 1954.

Can you read yourself to happiness? Read the article

The top bookseller of collectible copies of the AA Big Book is Bill Schaberg of Athena Rare Books in Fairfield, Connecticut. Bill's association with the book began in the early 1990s.

"Typically, people come to this book because of the vast impact it has had on their lives - once they have gotten sober," said Schaberg. "While there is some significant history in the first 16 printings of the book (most notably one, two and 11), this is not what attracts most collectors. It usually more of a 'this book saved my life!' and it makes sense to me that they should own a first edition copy of it. Although the book launched one of the great spiritual movements of the 20th century, the value of that movement is most appreciated by people who have benefited from it."

The most expensive copy of the Big Book to sell on AbeBooks was a first edition first printing for $13,000 in 2013. Several more expensive copies are available via AbeBooks. A seventh printing sold for 2,750 several years ago but you are unlikely to find that printing as cheap as that again.

"While first printings can be expensive, the cost can be minimized by buying a copy that lacks the original dust jacket (running about $12,000 to $15,000 these days) or one without the value-added inscriptions by early AA people," explained Schaberg. "Later printings (two to 16) of the first edition become progressively cheaper."

Aside from the likes of key religious books, are there any other books like the Big Book that has helped develop organizations and groups of like-minded people?

"Many non-religious groups have founding documents that are on occasion sought by members of that group. For instance Baden Powell's early works for the Boy Scouts or, more expensively, the Federalists Papers, foundational works in the acceptance of the Constitution," explained Schaberg. "I would also be remiss if I didn't mention the on-going attraction of Adam Smith's Wealth of Nations (the foundational work of capitalism) for hedge-fund-type-guys - people who typically buy only ONE rare book in their lives... but that is the ONE book they want."

If you are struggling with addiction, learn more about finding help at aa.org

Alcoholics Anonymous Comes Of Age: A Brief History of A. A
Published by Alcoholic Anonymous in 1957, a handful of copies signed by Bill Wilson are available on the site.

My Name is Bill by Susan Cheever
An extensive biography drawn from letters and diaries, records in a variety of archives, and hundreds of interviews.

Bill W by Robert Thomsen
Published in 1975, this biography takes the reader through the events in Wilson's life before and after Alcoholics Anonymous.

Bill W by Francis Hartigan
Hartigan was the former secretary and confidant to Bill Wilson's wife, Lois, so the author brings some insider knowledge. Drawing on extensive interviews with Lois and early members of AA, he fully explores Wilson's devotion to his cause.

Ebby: The Man Who Sponsored Bill W by Mel B
In 1934, Ebby Thatcher called an old drinking buddy to tell him about the happiness he was finding in sobriety. His friend's name was Bill Wilson, and this book is the story of their life-long friendship. It is both a history of the formative years of Alcoholics Anonymous, as well as the bitter-sweet tale of the troubled man Bill W. always referred to as "my sponsor."

Dr Bob and the Good Oldtimers by AA
A book that looks at the development of AA via Dr Bob Smith and his Ohio meetings.


What is the most influential self help book?