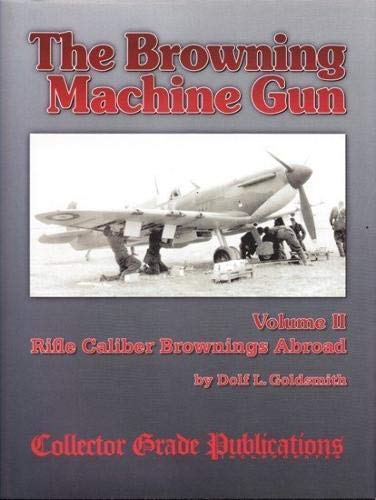 This second volume of Dolf Goldsmith's series on Browning machine guns proves beyond doubt that the rifle-caliber Browning was simply the most popular and most-used machine gun ever designed. In some ways this book is even more engrossing than Volume I, as it describes and illustrates in considerable detail the many variations on the basic Browning which were manufactured and/or used by over twenty countries, in virtually every corner of the world, in both World Wars, in Korea and in Vietnam. Of particular interest is the focus on the aircraft Browning, beginning in the Interwar years, in Britain and particularly in Belgium, where Dieudonné Saive, John Browning's erstwhile chief assistant, twice increased the rate of fire of the FN Browning aircraft machine gun, first in 1932 to 1,200 rpm and again in 1938 to 1,500 rpm, in order to keep pace with the ever-faster airspeeds of the best new fighters and pursuit aircraft. It may seem strange to feature an aircraft, even one so famous as the British Spitfire, one of the best all-round fighters of World War II, on the cover of a book about Browning machine guns. However there are really eight Browning machine guns in this picture! As discussed in Chapter Two of this book, the crucial decision to equip each British fighter with eight Brownings was of no less than monumental importance. On this subject the late Col. George M. Chinn USMC (ret.), the author of the authoritative five-volume series of books titled The Machine Gun, commented decisively, "Students of warfare are generally in agreement that the most far-reaching single military decision made in the 20th century was when a small group of British officers, shortly before World War II, decided to mount eight caliber .303 Brownings on their Hurricane and Spitfire fighters. This single act undoubtedly brought about a turning point of the war".

Specializing in quality reference books for gun collectors - Out of of print, rare, used, and some new. Also books on shooting, hunting, gunsmithing, firearms engraving, scrimshaw, edged weapons, and other related topics. Large selection of related periodicals (some hardbound). FREE BOOK SEARCHES. Personal service from one collector to another. Always interested in purchasing books in fine condition on the above subjects. Single copies or complete libraries. Large list $3. International $4.


BSG Books is owned and operated by Bert Garber as a Sole Proprietorship at 305 Bent Tree Court, Covington, LA 70433, U.S.A. Telephone: (985)893-9058. Email address: bsgbooks@bellsouth.net. All customer inquiries or complaints can be directed to the above address, telephone number, or email address. Business license and Louisiana Tax Identification Number are available upon request.
For direct orders, quotes, or inquiries call (985)893-9058 or email bsgbooks@bellsouth.net for fast service. Books ...


For direct orders, quotes, or inquiries call (985)893-9058 or email bsgbooks@bellsouth.net for fast service. Orders usually ship within 2 business days. Shipping costs are based on books weighing 2.2 LB, or 1 KG. If your book order is heavy, oversized, or of excess value we may contact you to let you know extra shipping is required.