Home Nasim Zehra From Kargil to the Coup: Events that Shook Pakistan 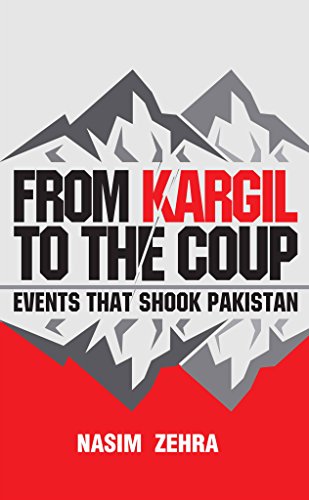 From Kargil to the Coup: Events that Shook Pakistan

Synopsis: Ever since the Kargil war of 1999 between then newly nuclearized India and Pakistan, there has been endless speculation about the precise motivations, planning and execution of the operation. In her long-awaited study of Kargil, Nasim Zehra combines hitherto unknown information garnered from key players in the Pakistani military establishment involved in the planning of the incursion with a historically grounded and analytically nuanced analysis of the Indo-Pakistan conflict over Kashmir. She convincingly shows how the Kargil conflict accentuated Pakistan s relations with not only India and the United States of America but also brought to the fore age-old tensions between the civil and military arms of the state, resulting in the 1999 military coup. A gripping account of the Kargil war as it unfolded surreptitiously and then flagrantly, this study puts to rest myths about the relative strengths of the military decision-making process in Pakistan compared to its civilian counterpart, underscoring the imperative need to streamline both with a view to facilitating more cooperative relations between them, especially in the realm of strategic security. Well researched and persuasively argued, the book is mandatory reading for students of international relations and South Asia. (Professor Ayesha Jalal, Historian) Nasim Zehra s book is a remarkably honest, bold, diligent and well-researched account of the Kargil episode, a doomed initiative, conceived in shadows, without a thought-through institutional evaluation and based on a misreading of the international situation. The author combines a wealth of information and a good deal of fresh detail with scholarly insights and deep analysis. She has produced a comprehensive landmark case study- a must read- of great value to policy makers and scholars in Pakistan and to the wider readership interested in the history and political affairs of the country and the region. (Riaz M Khan, Senior Diplomat, former Foreign Secretary) The Kargil episode has remained an enigma both in Pakistan as well as India. Shrouded in secrecy, the deafening silence on this conflict has given rise to many conspiracies, rumours and ill-informed opinions on both sides of the divide, in India and Pakistan. In this book, the author has collated facts painstakingly and juxtaposed them into the regional environment. She establishes the context of this conflict in the light of the US-Afghan issues at the time, the international concerns in view of the potential of a Nuclear Conflict, the contradictions of the Lahore Declaration and the history of the Line of Control. An extremely well analysed study that will remain a reference point for any further study. (Lt General (retd) Tariq Khan, Pakistan Army Armoured Corps)

About the Author: Nasim Zehra is a national security specialist and a prominent journalist. As a columnist, television host, and teacher, with extensive experience in the development field, she writes and lectures widely on national security and global politics. Ms Zehra holds an MBA from Quaid-i-Azam University, Islamabad and a Master s degree in Law & Diplomacy from the Fletcher School of Law and Diplomacy, Tufts University, USA. She has been a Fellow of the Harvard University Asia Centre, on the Visiting Faculty of the Quaid-i-Azam University, Islamabad; National University of Science and Technology; and at the School of Advanced International Studies, Johns Hopkins University.

1. From Kargil to the Coup

2. From Kargil to the Coup

3. FROM KARGIL TO THE COUP - EVENTS THAT SHOOK PAKISTAN

4. FROM KARGIL TO THE COUP - EVENTS THAT SHOOK PAKISTAN

5. From Kargil to the Coup: Events that Shook Pakistan