Items related to Sound of the Beast : The Complete Headbanging History... 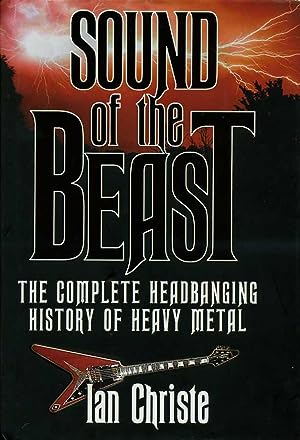 Sound of the Beast : The Complete Headbanging History of Heavy Metal

Quantity: 1
View all  copies of this book
Buy Used
Price: US$ 20.73 Convert Currency
Shipping: US$ 19.45 From United Kingdom to U.S.A. Destination, rates & speeds
Add to basket

No inscriptions or marks. A lovely clean crisp very tight copy with bright unmarked boards, very slight bump to bottom of spine and no bumping to corners. Dust jacket not price clipped or torn with light creasing to upper and lower edges. The first definitive and highly illustrated look at the madness and mayhem of heavy metal. From its cataclysmic beginning with Black Sabbath more than 35 years ago through to the chart sensation The Darkness, heavy metal has become a dominant force around the globe. Yet despite selling more than a quarter-billion albums and breaking into new markets wherever it can be heard, metal has never before been given a complete overview of its dark, powerful and untamed history - until this book. 399pp. We do not use stock photos, the picture displayed is of the actual book for sale. Every one of our books is in stock in the UK ready for immediate delivery. Size: 9.5 x 6.25 inches. Seller Inventory # 003706

Title: Sound of the Beast : The Complete ...

Welcome, all ye who dare enter Sound of the Beast, the first definitive and highly illustrated look at the madness and mayhem of heavy metal. From its cataclysmic beginning with Black Sabbath more than thirty years ago to the hyperactive 'nu metal' bands, through to the new chart-top sensation The Darkness, heavy metal has become the dominant musical force around the globe. Yet despite selling more than a quarter-billion albums and breaking into new markets wherever it can be heard, metal has never been given a complete overview of its dark, powerful, and untamed history - until now. With hair bristling and fangs bared, Sound of the Beast is the must-read story of heavy metal for die-hard fans, fresh converts, and musical thrill seekers alike. Hear the call of the wild as this dark, elusive, and ear-splitting form of music finally gets its justice, and leaves everyone in its wake banging their heads and flipping the devil sign.

Ian Christe grew up in the metal strongholds of Switzerland, NewMexico, Indiana, Germany, and Washington. He moved to New York Cityin 1992, and has covered emerging technology and fringe culture forReuters, Wired, and Salon.com. His hundreds of articles on heavymetal have appeared in Spin, AP, CMJ, Metal Maniacs, and the Trouser Press Guide to '90s Rock and been cited by The New York Times.

We have been selling mainly non-fiction books for over 20 years and now have a very varied stock of over 10,000 books. As not all are yet online, please ask us for your search items as we may have the book you are seeking waiting to be catalogued.


Payment directly via credit card, by debit card, the ABE credit card process, PayPal, UK pounds money order or UK cheque. Royal Mail 2nd class or Airmail or Surface service is usually used. If you would like the book insured or if you require the book urgently, eg. guaranteed next day, please ask us about these additional services. You can contact us at godleybooks@dapple.plus.com


Our delivery company is Royal Mail.
Orders usually ship within 2 business days. Guaranteed next day delivery is also available in the UK. Please contact us directly to ask about this service.
UK Shipping costs are based on packaged books weighing 2.2 LB, or 1 KG. If your book order is heavy or oversized, we may contact you to let you know extra shipping is required.
Overseas shipping is by either Royal Mail Airmail or Surface so we may contact you to confirm your choice of these options or for extra shipping if your overseas book order is too heavy for either of these services at the standard charge.
You are welcome to ask us about direct postage costs.