Items related to Talkative Man: A Novel of Malgudi 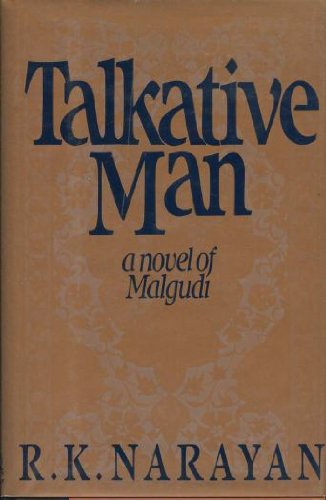 Talkative Man: A Novel of Malgudi

Quantity: 1
View all  copies of this book
Buy Used
Price: US$ 12.00 Convert Currency
Free Shipping Within U.S.A.
Save on shipping

Talkative Man, a young journalist struggling to establish a reputation, pieces together a portrait of the mysterious Dr. Rann--who makes himself TM's extended houseguest and claims to be researching a project for the United Nations--and his effects on the Malgudi people

R. K. Narayan (1906–2001), born and educated in India, was the author of fourteen novels, numerous short stories and essays, a memoir, and three retold myths. His work, championed by Graham Greene, who became a close friend, was often compared to that of Dickens, Chekhov, Faulkner, and Flannery O'Connor, among others. October 10, 2006, is the centennial of Narayan's birth.

About Periplus Line Periplus Line brings you unique, new, old, out of print and hard-to-find books mostly from South Asia, but also from near at hand. Book publishing, import and sales have operated from this site in East Glastonbury for three decades. Periplus Line LLC has combined the output of the following ? The Ind-US Inc. collection ? vintage items, mostly paperback, imported 1960s ? 1990s from India-based publishers ? The Homestead Collection ? Rare Books; Signed Books; Local History & Genealogical ? The Writers Workshop Collection ? modern India poetry and classics ? Parijata Publications ? our own publications; genre: Indian Thought, India Traditions, Indic Religions; Hinduism; India Folklore and Art. A Welcome Aboard? To those friends who have been voyaging with us these many moons: We are happy to receive your queries for titles you may recall but don?t see in our current inventory on line. We may be able to discover them on the back shelf or direct you where else to look. For those now joining us, we take pride in describing our books in ways that help you see them in hand.


We guarantee the condition of every book as described on the Abebooks web site. If you're dissatisfied with your purchase (Incorrect book/not as described/damaged) or if the order hasn't arrived, you're eligible for a refund within 30 days of the estimated delivery date. Please use the Ask bookseller a question link to contact us and we'll respond within 2 business days.


Shipping costs are based on books weighing 2.2 LB, or 1 KG. If your book order is heavy or over-sized, we may contact you to let you know extra shipping is required.