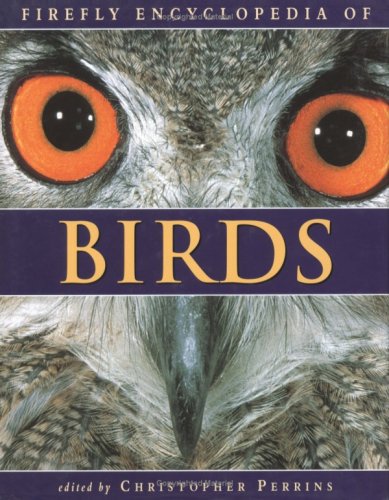 The ultimate reference to the vast world of birds.

Discover a family of birds who are phenomenal fliers but cannot walk or climb. There is a species that nests at the Arctic Circle and winters at the lower tip of South America, migrating up to 235,000 miles in its lifetime. These and thousands more winged wonders are described in fascinating detail in the Firefly Encyclopedia of Birds.

With contributions by a team of 100 distinguished zoologists, the Firefly Encyclopedia of Birds is a major reference work for all birders as well as students and naturalists.

Christopher Perrins is Director of the Edward Grey Institute of Field Ornithology at Oxford University.

Birds arouse more interest among the general public than any other animal group, even including mammals. At first sight it is surprising that humankind should respond in this way - we are, after all, mammals. However, most mammals rely on a different mix of sense organs than we do -- the senses of smell and hearing are often as important, or more so, than vision; further, few mammals have color vision. Birds, on the other hand, share with man a dependence on color vision and sound as their two main senses and, in keeping with this, they are often brightly colored. Finally, the majority of birds are active during daylight hours.

We can, therefore, perhaps "perceive" more of a bird's world than of many mammals. Consider, for example, our best-loved pet, the dog. On a walk, it spends a great deal of time smelling objects: plainly, it is acquiring a large amount of information about its surroundings. Yet, in spite of our long association with dogs, we really do not begin to understand the olfactory messages that it is receiving. Hence it seems easier for us to understand the various activities of birds than of most mammals. However, this may be an illusion. For instance, it is becoming clear that birds "see" ultraviolet as a "color" and hence their perception of the colored world is likely to be substantially different from ours. Likewise, there is some evidence that birds may not hear sounds in the same way that we do.

In this work, we have tried to provide the reader with an encapsulated but up-to-date account of the world's birds. It has been inevitable that we should deal with them by family rather than by individual species, because of the numbers involved, more than twice as many as there are mammals. There is no absolute, agreed number of bird species; some 9,850 are included in this volume. However, a large number of them are virtually unknown; the nest and eggs of many species have not yet been described and, for a number of species, we have inadequate records of their range. The vast majority of these, of course, are species that live in the tropical forests where their ability to fly, their small size, and the density of vegetation mean that they remain virtually unobserved. From the conservation point of view, more seriously, we do not know enough about their status. BirdLife International has listed 1,186 species -- or some 12 percent of the total -- as threatened (3 Extinct in the Wild, 182 Critically Endangered, 321 Endangered and 680 Vulnerable). A further 727 are Near-threatened. Sadly, some of those classified as Critically Endangered are probably already extinct.

Nevertheless, at the family level, most groups of birds are adequately known for it to be possible to give a comprehensive review of the colorful and varied array of this fascinating assemblage of animals. In particular, there has been during recent years a great increase in the number of detailed studies of the behavior and ecology of many species, including at least one or two from most of the major families, including the tropical ones and these give us at least an indication of how the other related species are likely to live. These studies have not merely filled out what was known before; they have demonstrated the ways in which birds cope with their environment which, we realize as we learn more, is a very complex one. The birds are far more intricately adapted to their ways of life than the casual observer might at first assume; natural selection is a powerful tool.

In particular, recent studies have shown that, in many groups, family life is much more complex than was once thought and there is still much to be learned. Originally, most detailed studies had been conducted in Europe and in North America, where the majority of birds live in simple, monogamous pairs. In contrast, many of the species in the tropics live in "extended families" where six or more birds may share a territory and look after a single nest. The advent of DNA technology has also caused us to revise our thinking. For example, a very large number of birds live as pairs on territories and have been considered monogamous. However, DNA "fingerprinting" of their broods reveal that in many species a significant proportion of their young are not fathered by the male territory holder.

The book's organization follows a very simple principle. In the overwhelming majority of cases, each article deals with a single family. The sequence of families that is used here is given on page 19, while notes outlining some of the major differences of opinion among ornithological systematists about the way in which birds should be classified will be found on pages 14-15, as well as in the articles themselves. Readers seeking further information on the problematic question of bird classification should also refer to relevant texts listed in the Bibliography.

There is a widespread view held by the "man in the street" that the experts should know how many species of birds (or other animals) there are. This is a long way from being the case. It is not even easy to define a species! Perhaps the commonest way to determine whether an animal is a different species from another is to base the decision on whether or not the populations to which they belong naturally interbreed. However, in many cases animals that can potentially interbreed in captivity may not meet in the wild -- they may, for example, live on different, far-distant continents. Therefore, one has to decide (or test) whether or not they would interbreed if their ranges naturally overlapped. There can be no objective view and, not surprisingly, opinions differ widely. Studies of their biochemistry and anatomy are also important in deciding species relationships. The increasing knowledge of tropical birds is also leading to the discovery of new species. Although a few completely new birds are still being discovered, the large majority of new species are being recognized because detailed studies reveal that wide-ranging forms, formerly thought to be a single species, are in fact best regarded as two (or sometimes more) different species, each occupying only a part of the former extensive range.

As a result, no two books will necessarily list the same families, or identify the same number of species within each family. Since this book is not primarily a book on taxonomy, we have attempted to avoid undue eccentricity. However, the author of each article is often a leading expert on the group concerned and so we have encouraged them to use the results of their own studies.

The textual discussion of each family is supplemented by a Factfile, which provides handy reference to the key features of distribution, habitat, size, diet and so forth. It also contains a scale drawing comparing the size of a representative species with that of a 6ft (1.8m) human or a 12in (30cm) human foot or head. Where there are silhouettes of two birds, they are the largest and smallest representatives of the family. Unless otherwise stated, dimensions given are for both males and females. Where there is a difference in size between sexes, the scale drawings show the larger sex.

In each Factfile, a map summarizes the family's natural global distribution (not introductions to other areas by people). These maps are intended merely as a snapshot of where birds of the family in question might be encountered. Given the necessarily small scale of the maps, they neither distinguish between breeding and wintering grounds for migratory birds, nor show detailed migration routes. However, such information is given in the accompanying Factfile distribution data, and/or is expanded on in the main text.