Items related to Handbook of the Birds of the World, Volume 3 (Hoatzin...

Josep Del Hoyo Handbook of the Birds of the World, Volume 3 (Hoatzin to Auks) (English, French, German and Spanish Edition)

Handbook of the Birds of the World, Volume 3 (Hoatzin to Auks) (English, French, German and Spanish Edition) 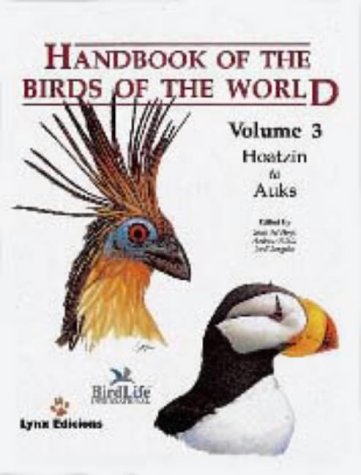 If books were judged by weight this one 4.1 kg (9 lb) would certainly come out on top. However it also succeeds when judged by various more traditional bird book standards. It is a good read, a competent reference, contains good quality photographs to a high standard of reproduction and has expertly prepared colour illustrations. This is the 3rd volume of the series which will probably run to nine or ten volumes eventually, covering all the birds of the world. This volume covers the single species opisthocomiformes (hoatzin), the gruiformes including cranes, rails and bustards, and the charadriiformes, that is waders, gulls and terns. The series has settled into a consistent format whereby birds are dealt with at two levels, at the family level and at the species level. At the family level treatment, for example of the sternidae (terns), covers the general aspects of species including systematics, ornithological aspects, habitat, general habits, voice, food and feeding, breeding, movements, relationships with man, and status and conservation. A box at the beginning of the family provides outline world range map for the family , size range, general habitat, the number of genera, species and taxa (total sub-species recognised), for terns this is 10,44 and 123 respectively. There is also a conservation line highlighting the number of species threatened or extinct since 1600. Five species of terns are threatened but none have recently become extinct. The family sections are illustrated with some stunning photographs of birds engaged in typical activities for the genus such as feeding methods, flocking, nesting, mating etc. Each photo has a very full descriptive caption which compels even the most hurried of browsers to linger. The species accounts provide bird names in French, German and Spanish and deal with each species against the sub-headings of taxonomy, sub-species and distribution, descriptive notes, habitat, food and feeding, breeding, movements and status and conservation. An abbreviated bibliography appears at the end of each species account and cross-refers to the nearby colour artwork illustrating each species. Species accounts also have a world range map showing breeding and non-breeding range. These maps change format according to size of range and are quite ample. The species account generally answers most questions the average reader/researcher will need however they are not as lengthy as those in BWP. Rightly or wrongly everyone tends to judge bird books on the quality of the artwork and HBW comes out very well in this respect. Each species is illustrated at least once and sometimes several illustrations appear to show sex/race variations. Volume 3 is illustrated by a top class international team. HBW presents information on every species in the world and an illustration of each species. The text accounts are very readable and in a straightforward unstuffy style which is quite unlike many of the more traditional handbooks that have recently appeared or are in production at present. This volume has a high degree of Arabian relevance, of the 547 species dealt with a quick count suggests 124 have occurred in Arabia and of these about 35 have bred. It is expensive but so are so many good bird books. Recommended. -- The Phoenix, December 1, 1997

One only has to open this book to see the extremely high standards the publishers have set themselves. At first, I found myself not working through the book in any order, merely turning over page after page wondering where I would have to go to see the species photographed. The photographs are of amazing quality and introduce the reader (certainly this one) not only to new species but also to new families. I was stunned to see the photograph of South Africa's Blue Cranes and made a note to catch up with this species sometime in the future. Perhaps the accompanying text could have included the name of the species in bold since they act more as an additional text rather than as labels for the photographs.

Rather than acting as an identification guide, HBW attempts to illustrate and describe every species currently known as well as keeping abreast of recent thoughts in taxonomy - no mean feat bearing in mind the amount of work currently being undertaken by different authorities. The last eighty or so pages are purely references which gives us some idea of the work that has gone into this book.

My only reservation in recommending this book is that once you have bought one, you really feel you have to buy all of them! However, if they are all of this standard, your money is well spent and gives you an excuse for buying a sturdy new bookcase!. Richard Bashford -- BTO News, 209, April 1, 1997

This is the third volume in an outstanding series aiming to provide species level accounts for all the birds of the world, and it is superb. Volume 3 covers 577 species from 30 families, beginning with Opisthocomidae (Hoatzin Opisthocomus hoazin is classified in its own monotypic order for the purposes of this book) and ending with Alcidae. The format follows that established in the first two volumes (see Ibis 135: 337-338). The reader is first introduced to each family, and then detailed accounts of every species in that family follow. It is a very successful formula. Every aspect has been well thought through so the book is both practically set out as well as being visually pleasing. I was particularly impressed with the text that accompanied each of the stunning photographs, so often a weak point in less carefully assembled works. I also liked the short bibliography at the end of every species account for its practical application for those seeking to read further. There are more than 10,000 references used. Relevant recent literature is well represented, with several papers cited that were published in 1995.

My criticisms are minor. The index is simply an alphabetical species list. This said, and because of the structure of the book, it is difficult to conceive a practical way of adding a broader range of information to it. The meaning of the colour coding for the range maps is not detailed in this volume (as it was in the first) but is intuitively clear enough. The hyphenated splitting of words between two lines is habitual throughout this volume and possibly detracts slightly from the readability and perhaps should have been avoided. Whereas the introductions to each family are printed with a 10 pt. font, the species accounts are printed in 8 pt. font. This is a rather tiny font size in a rather large volume made more noticeable by the constant switches between the two throughout.

If given enough time, you could find all the information presented in this book scattered throughout the ever expanding plethora of ornithological literature. However, it must benefit our field immeasurably to have so much of it gathered together and presented so professionally in one reference series.

Put simply, the fine work is a painstakingly researched, thoughtfully set out, carefully written and beautifully illustrated tribute to all those involved in its production. The authors are attempting a great deal with this project. It is a measure of the level of accomplishment achieved to say that they have succeeded in all facets once again with this praiseworthy addition to the series. Ian F. Hill -- IBIS, January 1, 1997

1. Handbook of the Birds of the World, Volume 3 (Hoatzin to Auks) (English, French, German and Spanish Edition)

3. Handbook of the Birds of the World, Volume 3: Hoatzin to Auks

Book Description Lynx Edicions, 1996. Hardcover. Condition: New. Dust Jacket Condition: New. Brand new hardcover in dust jacket. This volume offers comprehensive coverage of: Hoatzin, Mesites, Buttonquails, Cranes, Limpkin, Trumpeters, Rails, Gallinules And Coots, Finfoots, Kagu, Sunbittern, Seriemas, Bustards, Jacanas, Painted Snipes, Crab Plover, Oystercatchers, Ibisbill, Avocets, Stilts, Thick-Knees, Pratincoles, Coursers, Plovers, Sandpipers & Allies, Plains-Wanderer, Seedsnipes, Sheathbills, Skuas, Gulls, Terns, Skimmers, Auks. 60 color plates, 389 photos. This is the first work ever to illustrate all the species of birds in the world, in addition to providing access to all the essential information about each one of them. Each volume measures 9.75 in x 12.5 in (24 x 31 cm). They include exhaustive family texts, plus detailed individual species accounts which include distribution maps. Each species is illustrated on a color plate, including all significant sexual and subspecific differences, and high quality color photographs depict many aspects of the birds' life and behavior. English, French, German, Spanish, and Latin names are given for each species. The series is complete in 16 volumes. Oversize-extra postage may be requested. Seller Inventory # HBW3

4. Handbook of the Birds of the World, Volume 3 (Hoatzin to Auks)