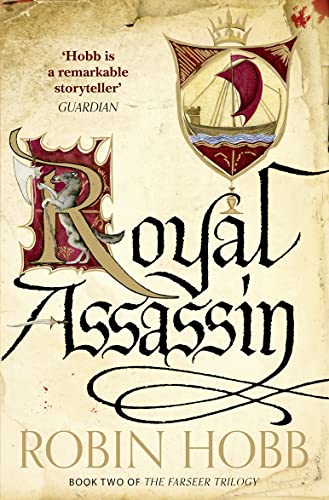 Young Fitz, the illegitimate son of the noble Prince Chivalry, is ignored by all royalty except the devious King Shrewd, who has had him tutored him in the dark arts of the assassin. He has barely survived his first, soul-shattering mission, and returns to the court where he is thrown headfirst into the tumult of royal life. With the King near death, and Fitz's only ally off on a seemingly hopeless quest, the throne itself is threatened. Meanwhile, the treacherous Red Ship Raiders have renewed their attacks on the Six Duchies, slaughtering the inhabitants of entire seaside towns. In this time of great peril, it soon becomes clear that the fate of the kingdom may rest in Fitz's hands--and his role in its salvation may require the ultimate sacrifice.

Robin Hobb is one of the world's finest writers of epic fiction.She was born in California in 1952 but raised in Alaska, where she learned how to raise a wolf cub, to skin a moose and to survive in the wilderness. When she married a fisherman who fished herring and the Kodiak salmon-run for half the year, these skills would stand her in good stead. She raised her family, ran a smallholding, delivered post to her remote community, all at the same time as writing stories and novels. She succeeded on all fronts, raising four children and becoming an internationally best-selling writer. She lives in Tacoma, Washington State.

Book Description Paperback. Condition: New. Language: English. Brand new Book. 'Fantasy as it ought to be written' George R.R. Martin The second volume in Robin Hobb's internationally bestselling Farseer Trilogy. Honesty is the bedrock for any relationship. But how can Fitz - royal bastard, trainee assassin, holder of secrets crucial to the security of the kingdom - bare his soul to his beloved Molly? Danger lies all around him - from the raiders savaging the coastal towns, and from within the court. The king has been struck down by a mystery illness and his eldest son, Verity, is bound up in the defence of the realm. When Verity leaves the court in search of the mythical Elderlings, Fitz finds himself friendless apart from his wolf, Nighteyes, and the king's strange, motley-clad fool, exposed to Prince Regal's malign ambitions. He will be asked to sacrifice everything - his heart, his hope, even his life - for the sake of the realm. Seller Inventory # AAZ9780007562268