Items related to The Black Death: Natural and Human Disaster in Medieval...

The Black Death: Natural and Human Disaster in Medieval Europe 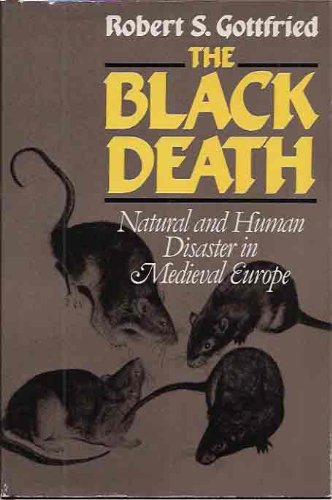 A fascinating work of detective history, The Black Death traces the causes and far-reaching consequences of this infamous outbreak of plague that spread across the continent of Europe from 1347 to 1351. Drawing on sources as diverse as monastic manuscripts and dendrochronological studies (which measure growth rings in trees), historian Robert S. Gottfried demonstrates how a bacillus transmitted by rat fleas brought on an ecological reign of terror -- killing one European in three, wiping out entire villages and towns, and rocking the foundation of medieval society and civilization.

Robert S. Gottfried is Professor of History and Director of Medieval Studies at Rutgers University. Among his other books is Epidemic Disease in Fifteenth Century England.

A Natural History of Plague

Like all infectious diseases, the Black Death has a natural history and can be properly understood only in that context. First, there is environment. Anyone traveling through Europe today would find it hard to imagine what the continent looked like a thousand years ago. There were no sprawling urban and industrial complexes, the outstanding characteristic of the last century, and surprisingly few towns of any size. Towns were usually far apart, located next to the sea or astride great rivers. By the middle of the twelfth century, a few urban centers in Italy and the Netherlands, and perhaps Paris, had fifty thousand or more people, but most claimed a thousand or so inhabitants. Nine out of ten Europeans lived in still smaller settlements, nucleated villages or hamlets of a few hundred people, fifteen to twenty miles apart. Both town and village were small and cramped, with woefully inadequate sanitation and transportation facilities. Ironically, in the confines of their small but isolated settlements, most people lived close together and had little privacy.

Surrounding the villages were the fields, pastures, and woodlands from which most people squeezed their subsistence. By 1250 or so, field and pasture had come to dominate Europe's landscape, but, until at least the mid-twelfth century, the extent and density of the woodlands characterized the European environment. In the far north -- most of Scandinavia and Russia -- the forests were coniferous, consisting primarily of fir trees, with a smattering of birch and, where the land was poorly drained and the elevation low, moors, marshes, and tundra. The rest of Europe had deciduous forests. The generally cold, wet, acidic-soil areas around the Baltic and North Seas and throughout much of eastern Europe had beech trees surrounded by holly and other aquifoliacs. Central Europe was mostly oak forest. Where the soil was alkaline, especially on both sides of the Alps and the Carpathians, the oaks were mixed with alders. Where the climate was wetter and the soil was more acidic, as in most of central and northern France and central Germany, the oaks were surrounded by birch and aspen. South of the Alps, in most of the Mediterranean Basin, the sunlight was brighter, the temperatures were higher, the rainfall was less frequent and less well-distributed throughout the year, and the soil was sandy and acidic. The Mediterranean Basin had also been settled longer than northern Europe and had a higher population density. Hence, it was less densely forested than the North; but, even in the twelfth century, much woodland remained, particularly stands of conifers, such as pines and junipers, which can tolerate sandy soils.

A second consideration in studying disease is causation. All epidemics, plague included, are caused by parasites that have relations with other, usually larger organisms. This process is a natural part of human and animal ecology. A third factor, and one of paramount concern to man, is toxicity. Epidemiologists generally distinguish between lethal and nonlethal diseases. Nonlethal infections are usually "old" and well-established. Often, they are only mildly deleterious to their hosts, thus ensuring a steady supply of victims. By contrast, those spectacular diseases that periodically burst onto the historical stage, killing large numbers of people, are caused by newer parasites that have yet to establish an equilibrium with their hosts. An example of an older disease is malaria; the plasmodium that causes it is debilitating, but generally not fatal. An example of a newer disease is pneumonic plague, which is 95% to 100% fatal. Both diseases have been significant in the past, but because of the plague's enormous mortality, it has had far greater impact.

A fourth concern regarding infectious diseases -- and, indeed, an important way of distinguishing one from another -- is their means of transmission. One such mechanism is direct contact between people, usually via the respiratory system. Diseases so disseminated include influenza, diphtheria, measles, and pneumonic plague. Respiratory diseases are highly communicable, virtually impossible to prevent, and closely related to human population density. Consequently, they were common in the cities and towns of medieval Europe. A second mechanism of dissemination comprises enteric diseases, those spread through the digestive system; among them are dysentery, diarrhea, typhoid, and cholera. Like respiratory afflictions, enteric ailments were very common throughout the Middle Ages. They often reflected social conditions, especially poor sanitation. Because of this, and in contrast to respiratory diseases, enteric diseases can be eliminated rather easily through basic improvements in public health.

Diseases are spread in at least two other fashions. One is through venereal contact, the prime example being the treponema infections, especially syphilis, and gonorrhea. The causative organisms of venereal ailments are highly vulnerable when exposed, even in temperate environments, and were less frequent in the Middle Ages than were either respiratory or enteric diseases. A fourth group, however, was very common -- diseases transferred to humans from animal hosts, with animals acting either as intermediaries, as with malaria or typhus, or as primary or secondary epizoötic victims, as with bubonic plague. The role of animals in the spread of diseases can be crucial: humans share 65 different diseases with dogs; 50 with cattle; 46 with sheep and goats; 42 with pigs; 35 with horses; 32 with rats and mice; and 26 with poultry. While not as common as respiratory or enteric diseases, those transmitted by animals are usually more lethal, since most viruses and bacteria, the organisms that actually cause infection, gain in virulence as they pass through the chain of hosts.

In addition to their virulence, diseases facilitated by animal intermediaries are important for other reasons. They represent still another disease classification and interpretation in that their dissemination and frequency are based primarily on the animal hosts rather than on humans. Bubonic plague provides a good example. When a rodent population in which plague is enzoötic, that is, indigenous, begins to multiply and reaches a certain population density, there is a concentrated transfer among the rodents of parasites -- fleas, in this case -- and bacteria. The result is usually an epizoötic among the rodents, which sometimes leads to an epidemic of bubonic plague. Some scholars have suggested that communicable diseases are a basic part of the human environment and a function of the population density, and that civilization and disease travel hand in hand. Accordingly, the incidence of a given epidemic would hinge on patterns of human settlement. This is indeed the case with respiratory, enteric, and venereal diseases, but it is not so with those diseases spread by animal intermediaries. The latter are primarily dependent on factors exogenous to civilization, such as climate and rodent and insect population density and ecology. There is great danger when studying the history of infectious diseases in being too anthropocentric and overemphasizing the human element. In many epidemic diseases, humans are most effective as carriers when entering new ecospheres, such as the Americas in the sixteenth century, where they brought smallpox and measles, rather than in areas of older inhabitation, such as Europe in the Middle Ages.

Another key characteristic in the development of infectious diseases is immunity. Humans have complex mechanisms for defending themselves against pathogens, the microorganisms that cause disease. Individual resistance varies with many factors, such as number of protective antibodies -- the proteins generated in reaction to the disease toxins introduced into the bloodstream. Immunity is either innate or acquired; if acquired, it is either active or passive. Active immunity comes when the host generates his own defenses, passive when generated defenses are introduced. Passive immunity is often only temporary. In the Middle Ages, active immunity was particularly important in determining the extent and intensity of an epidemic. Some infections, especially respiratory types such as smallpox and measles, do not change a great deal in their etiology. Hence, survival from an initial attack confers a degree of immunity, limiting recurrence to those members of society born after the last epidemic. Diseases for which there was immunity had less of an impact on medieval Europe than did more complex, multiple infections such as dysentery, influenza, and plague, for which immunity is quite limited, if it exists at all.

Medieval infectious diseases were an inheritance from the classical world. Between about 500 B.C. and A.D. 550 there were extensive contacts between the animal populations and the civilizations of China, Central Asia, India, the Upper Nile, and the Mediterranean Basin. As a result, as William McNeill has argued, there was a general confluence of Eurasian and African disease pools which, by the sixth century A.D., brought to the Mediterranean Basin most of the important diseases that can survive in temperate climates. To be sure, this proliferation of diseases took a long time. With a few exceptions, such as the Athenian Plague of the fifth century B.C., the classical world was remarkably free from major, deadly epidemics. This was fundamental to its steady population growth, which continued almost unabated until the second century A.D. But this biological peace was deceptive; in fact, the peripatetic character of ancient empires acted as a conduit and incubator for future disease patterns. An example was the reticulum of commerce and communications established by the Romans late in the first century B.C. This included their famed road system and, even more important, network of commercial sea routes. The sea routes converged on the Levantine Coast, then branched east across the northern Arabian Peninsula to the Arabian Sea, the Indian Ocean, and South A...

1. The Black Death: Natural and Human Disaster in Medieval Europe

2. The Black Death: Natural and Human Disaster in Medieval Europe

3. The Black Death: Natural and Human Disaster in Medieval Europe

4. The Black Death: Natural and Human Disaster in Medieval Europe

6. THE BLACK DEATH: NATURAL AND HUM