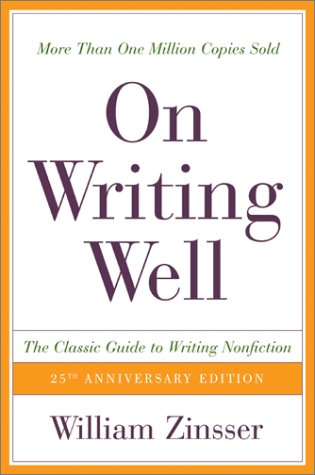 On Writing Well has been praised for its sound advice, its clarity and the warmth of its style. It is a book for everybody who wants to learn how to write or who needs to do some writing to get through the day, as almost everybody does in the age of e-mail and the Internet. Whether you want to write about people or places, science and technology, business, sports, the arts or about yourself in the increasingly popular memoir genre, On Writing Well offers you fundamental priciples as well as the insights of a distinguished writer and teacher. With more than a million copies sole, this volume has stood the test of time and remains a valuable resource for writers and would-be writers.

William Zinsser is a writer, editor and teacher. He began his career with the New York Herald Tribune and has been a longtime contributor to leading magazines. His 17 books include Writing to Learn; Mitchell & Ruff; Spring Training; American Places; Easy to Remember: The Great American Songwriters and Their Songs; and most recently Writing About Your Life. During the 1970s he taught writing at Yale, where he was master of Branford College. He now teaches at the New School, in New York, his hometown, and at the Columbia University Graduate School of Journalism.