Items related to The Professor and the Madman

Simon Winchester The Professor and the Madman 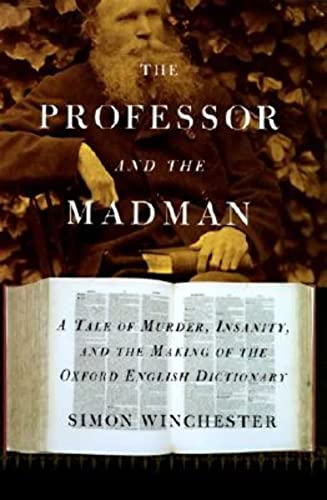 When the editors of the Oxford English Dictionary put out a call during the late 19th century pleading for "men of letters" to provide help with their mammoth undertaking, hundreds of responses came forth. Some helpers, like Dr. W.C. Minor, provided literally thousands of entries to the editors. But Minor, an American expatriate in England and a Civil War veteran, was actually a certified lunatic who turned in his dictionary entries from the Broadmoor Criminal Lunatic Asylum. Simon Winchester has produced a mesmerizing coda to the deeply troubled Minor's life, a life that in one sense began with the senseless murder of an innocent British brewery worker that the deluded Minor believed was an assassin sent by one of his numerous "enemies."

Winchester also paints a rich portrait of the OED's leading light, Professor James Murray, who spent more than 40 years of his life on a project he would not see completed in his lifetime. Winchester traces the origins of the drive to create a "Big Dictionary" down through Murray and far back into the past; the result is a fascinating compact history of the English language (albeit admittedly more interesting to linguistics enthusiasts than historians or true crime buffs). That Murray and Minor, whose lives took such wildly disparate turns yet were united in their fierce love of language, were able to view one another as peers and foster a warm friendship is just one of the delicately turned subplots of this compelling book. --Tjames Madison

It is known as one of the greatest literary achievements in the history of English letters. The creation of the Oxford English Dictionary began in 1857, took seventy years to complete, drew from tens of thousands of brilliant minds, and organized the sprawling language into 414,825 precise definitions. But hidden within the rituals of its creation is a fascinating and mysterious story--a story of two remarkable men whose strange twenty-year relationship lies at the core of this historic undertaking.

Professor James Murray, an astonishingly learned former schoolmaster and bank clerk, was the distinguished editor of the OED project. Dr. William Chester Minor, an American surgeon from New Haven, Connecticut, who had served in the Civil War, was one of thousands of contributors who submitted illustrative quotations of words to be used in the dictionary. But Minor was no ordinary contributor. He was remarkably prolific, sending thousands of neat, handwritten quotations from his home in the small village of Crowthorne, fifty miles from Oxford. On numerous occasions Murray invited Minor to visit Oxford and celebrate his work, but Murray's offer was regularly--and mysteriously--refused.

Thus the two men, for two decades, maintained a close relationship only through correspondence. Finally, in 1896, after Minor had sent nearly ten thousand definitions to the dictionary but had still never traveled from his home, a puzzled Murray set out to visit him. It was then that Murray finally learned the truth about Minor--that, in addition to being a masterful wordsmith, Minor was also a murderer, clinically insane--and locked up in Broadmoor, England's harshest asylum for criminal lunatics.

The Professor and the Madman is an extraordinary tale of madness and genius, and the incredible obsessions of two men at the heart of the Oxford English Dictionary and literary history. With riveting insight and detail, Simon Winchester crafts a fascinating glimpse into one man's tortured mind and his contribution to another man's magnificent dictionary.

The Professor and the Madman (Hardback)

Book Description Hardback. Condition: New. Language: English. Brand new Book. The compilation of the OxfordEnglish Dictionary was one of the most ambitious and challenging language projects ever undertaken. As definitions were collected, the vast over-seeing committee, led by professor James Murray, discovered that more than 10,000 definitions had been submitted by one man, Dr. W. C. Minor. When the committee insisited on honoring him, the incredible truth came to light: Dr. Minor was really a brilliant but severly ill inmate at an asylum for the criminally insane. This is the fascinating, unforgettable true story of a man who became the most prolific contributor of the English language and to history itself. Seller Inventory # BZE9780060175962

Shipping: US$ 4.00
From United Kingdom to U.S.A.
Destination, rates & speeds

THE PROFESSOR AND THE MADMAN; a Tale of Murder, Insanity and the Making of the Oxford English Dictionary

The Professor and the Madman: A Tale of Murder, Insanity, and the Making of the Oxford English Dictionary